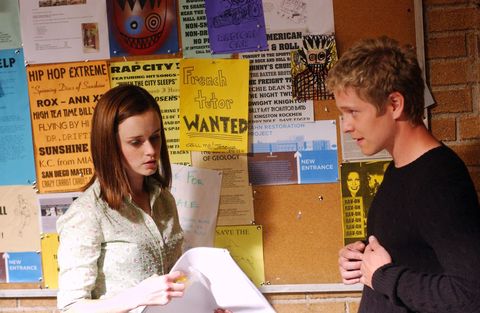 Remember when Rory lost her virginity to a Dean on Gilmore Girls, and kinda-sorta ruined his marriage? And then finally, after a million angst-ridden conversations with her mom, she learned the valuable life lesson that no, perhaps it's not a good call to sleep with your married ex? Well, she's back at it again in the Gilmore Girls revival.

The Netflix series picks up with Rory nearing the end of a two-year relationship with a man whose name Lorelai and Luke literally can't even remember. He's a complete dud and Rory knows it—but she keeps forgetting to break up with him (as ya do). It's kind of funny in a "this poor guy" kind of way, but mostly it goes against everything we thought Rory stood for.

Stranger still is the revelation that Rory is cheating on her unmemorable boyfriend with Logan Huntzberger, who now lives in London and is engaged to another woman.

Neither of them seem too torn up about their mutual infidelity (at least not in the first couple episodes), which again, seems massively out of character for Rory. Not for Logan, though—as all #TeamDean and #TeamJess purists know, he has a history of cheating.

We won't completely spoil the ending of Gilmore Girls: A Year in the Life for you, but if you've spent the last decade wondering whether or not Rory ended up with an old flame, the answer is yes-ish. As is the case with with most of life's best relationships, it's (majorly) complicated.