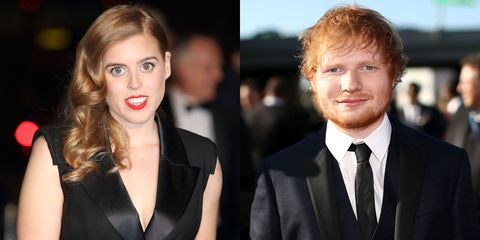 ICYMI, Ed Sheeran and Princess Beatrice were casually partying together at the Royal Lodge in Windsor (as ya do), when Beatrice inadvertently sliced his face open. You see, poor Beatrice was attempting to jokingly knight James Blunt (as ya also do), when she cut Sheeran on the cheek with a ceremonial sword.

"She was mortified! She genuinely thought she had disfigured his face," a source tells Us Weekly. "She was gasping and screaming and there was blood all down by his face." (Psst: check out a photo from singer Andy Patterson below.)

Poor Ed Sheeran had to rush off to a doctor—but fear not, he returned to the party because the Royal Lodge waits for no one. "He was like, 'It's fine, don't worry. Don't worry!' And he was kind of chuckling as he went off to get it seen to," the source said. "No one could believe it when he came back!"