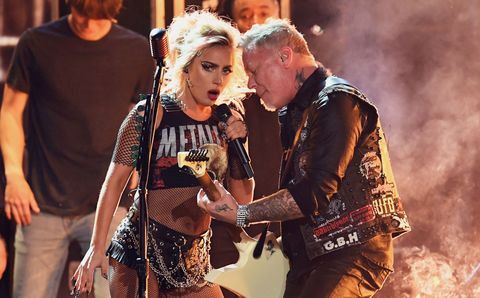 After a Super Bowl Halftime show that was *sheer* perfection, we were beyond excited to see what was in store for Lady Gaga's Grammy performance.

Before the Grammys, it was revealed that Gaga would be performing with Metallica, who previously said they had "something very unique and special planned."

What resulted was a head-banger that made for one seriously fierce Lady Gaga performance, as she sported a Metallica tank and snarled into the microphone like a natural metal-head. But the same frustrations Adele experienced with sound issues earlier in the evening (and last year, too) were a consistent theme here, since members of Metallica's microphones didn't even seem to be on at the beginning of the performance. Gaga shook off the sound issues like a pro, though, and ended things by crowd-surfing and twirling on them haters, which may be the only appropriate way to end a somewhat awkward performance with dignity.

See a clip from the performance below:

Maggie Maloney Associate Digital Editor Maggie Maloney is the associate editor at Town & Country and ELLE Decor, where she covers style, beauty, jewelry, and the many members of the royal family.
Advertisement - Continue Reading Below
More From Celebrity
Harry Could Lose Titles If He Becomes a US Citizen
Harry & Meghan Plan a UK Birthday Party for Archie
Advertisement - Continue Reading Below
New Photos Offer a Peek Inside Kensington Palace
Kate & William Discuss Pandemic Mental Health
Tom Hanks Shared an Update About Returning to U.S.
Harry & Meghan Emailed the Queen about Royal Exit
Meghan and Harry Def Want Another Baby
Tom Hanks & Rita Wilson Are Back in Los Angeles
Meghan Is Serious About Her Quarantine Precautions
Angelina's Kids Are Making Most of Quarantine