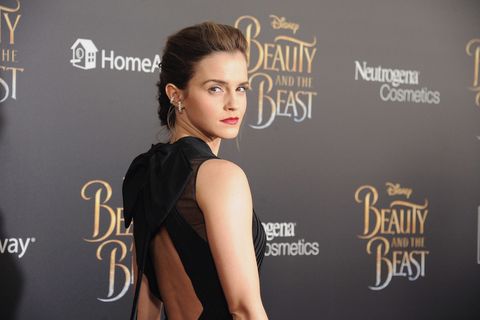 Emma Watson was recently on the cover of Vanity Fair wearing a dress that showed off the underside of her breasts. Which, BFD, right? But the internet was quick to slam her as hypocritical for being a feminist who shows her "tits," which is insane and ridiculous.

Emma Watson: "Feminism, feminism... gender wage gap... why oh why am I not taken seriously... feminism... oh, and here are my tits!" pic.twitter.com/gb7OvxzRH9

Watson made a statement about the controversy (saying "I really don't know what my tits have to do with it....They were saying I couldn't be a feminist and have boobs"), and then showed up to the NYC premiere of Beauty and the Beast wearing a dress with a cut-out window highlighting the exact same angle as her "controversial" picture:

Lesson learned? Don't @ Emma Watson, because she's not here for it. Also, some people have boobs, get over it.