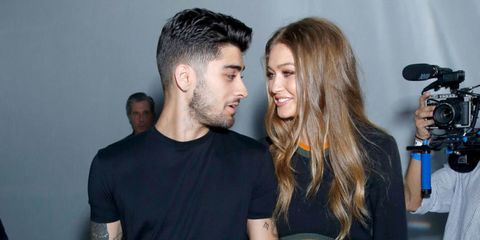 Zayn Malik and Gigi Hadid are a ridiculously cute couple. In a new interview with The Sunday Times Style, Zayn only cemented their adorable couple reputation by divulging their nicknames.

"I call her Gee, she calls me Zee," he revealed. "There's some other nicknames too, but I'll keep those private." Of course, now we're just very intrigued by the super secret nicknames.

He also revealed that, while Gigi hasn't been to his hometown of Bradford yet, she has met his family in London "a few times."

And even though Zayn and Gigi have been dating for well over a year, he still works to keep the romance alive. Earlier this month, Zayn tried to surprise Gigi in Paris while she was there for Fashion Week, E! Online reports.

"She didn't know I was coming," he said. "I went up to the suite to knock on the door…But my number had changed to European on her phone, so it wasn't much of a surprise in the end. She played along with it, though."

Well, it's the thought that counts.