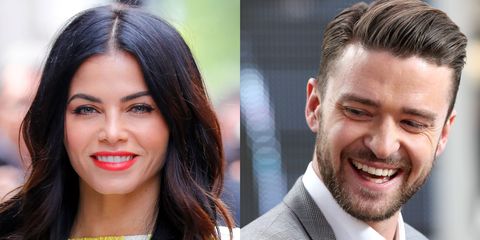 Believe it or not, before she was pirouetting into the arms of Channing Tatum in Step Up, Jenna Dewan-Tatum dated none other than Justin Timberlake. AKA this dude:

The pair started dating shortly after Justin broke up with Britney Spears, and met thanks to Jenna being a backup dancer on his tour. "We were, like, friends that then dated and we're just really good friends now," she recently told Andy Cohen. And please don't make the mistake of calling her a rebound.

"No, I was not the rebound!" she said. "I was very clear not to be [a rebound]. Of course he's sexy. But no, no I was not a rebound. We're still good friends. It's not as salacious as everyone thinks."

In related news, Jenna shut down a rumor that Britney and Justin had a post-breakup dance-off (as documented in Lifetime's Britney Ever After.)

Mehera Bonner Contributor Mehera Bonner is a news writer who focuses on celebrities and royals—follow her on Instagram.
Advertisement - Continue Reading Below
More From Celebrity
Behold: Celebrities Who Dated Normals
Kate Middleton & Michelle Obama Use This $64 Cream
Advertisement - Continue Reading Below
A Full Timeline of Tyler C. & Hannah B.
Blake and Ryan Donate $400K to NY Hospitals
Prince William May Work as an Air Ambulance Pilot
Harry Is Likely to Get U.S. Diplomatic Status
Harry Was Forced to Give Up His Military Titles
Ariana Grande Revealed Her Natural Curls
Fans Love This Accident Meme of Queen Elizabeth
Kate and Will Are Symbolically Leading Monarchy