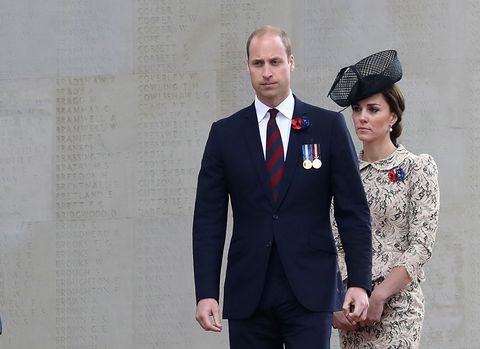 While vacationing in southern France in 2012, Prince William and Kate Middleton were photographed without their consent by paparazzi, who managed to snap photos of the duchess sunbathing nude—including one where William is rubbing sunscreen on her. St. James's Palace issued a statement after the photos were published in French magazine Closer (saying they were "reminiscent of the worst excesses of the press and paparazzi during the life of Diana, Princess of Wales") and the royal family swiftly took action.

The French editor who published the photos argues the photos offer a "flattering portrayal" of the royal couple, according to ABC News. She also claimed that the balcony where they were seen gets passed by "thousands of cars" every day, and that "security was more an issue rather than media frenzy."

Thanks to a lawsuit against photographers and editors of Closer, the magazine might have to pay 1.5 million euro for damages. The thing is, a court in Nanterre just reportedly postponed the ruling from July 4th until September—which means Kate and William have to wait a few more months until justice is (potentially) served.

The trial began in May, at which point the couple's lawyer Jean Veil released the following statement from Prince William:

"In September 2012, my wife and I thought that we could go to France for a few days in a secluded villa owned by a member of my family, and thus enjoy our privacy. We know France and the French and we know that they are, in principle, respectful of private life, including that of their guests. The clandestine way in which these photographs were taken was particularly shocking to us as it breached our privacy."

As previously mentioned, Kate and William are seeking fines of 1.5 million euros.

Mehera Bonner Contributor Mehera Bonner is a news writer who focuses on celebrities and royals.
This content is created and maintained by a third party, and imported onto this page to help users provide their email addresses. You may be able to find more information about this and similar content at piano.io
Advertisement - Continue Reading Below
More From Celebrity
Kate Middleton's Subtle Environmental Fashion Look
Prince George "Adored" Seeing Dinosaur Fossils
Advertisement - Continue Reading Below
Kate Middleton Borrows The Queen's Fashion Trick
Princes Charle and William "Competing" Over Causes
Lilibet May Be Christened in California After All
The Sweet Family Photos in Prince William's Office
Royal Family Members Can’t Eat Pasta or Potatoes
Prince George Is an Environmentalist, Too
Salma Hayek Looked Super Hot in Leopard Print
Britney Spears Just Trolled Justin Timberlake