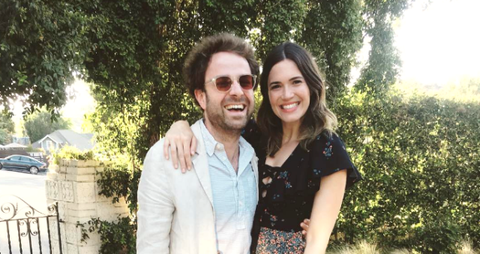 Rumors have been swirling that that Mandy Moore is engaged to her boyfriend Taylor Goldsmith, and they just got 100 percent confirmed thanks to her This Is Us co-stars—who apparently have no idea how to keep a secret.

While talking to ET, Chris Sullivan went ahead and mused, "I was just in the studio with her her boyfriend, well now fiance, Taylor. He didn't say a word! He seemed a little effervescent, but he's always pretty effervescent... I know him very well."

Apparently, Moore broke the news in a group chat: "I've seen the sparkler, but I have not heard the story yet because I have not seen her yet," Sullivan continued. "She just sent out an alert over our family text chain, so I can't wait to hear about it. She just sent a photo and just wanted us all to know that this just happened, and so then we went on a response spree for about a day and a half. I'm a huge fan of GIF'ing! I GIF the shit out of that text chain, and I feel like it's appreciated!"

To react in Sullivan's preferred language of GIFs:

Literally, worst secret keeper ever. Well, tied with Jon Huertas who said, "I think it's amazing. Good for her. I'm happy for her. Taylor is an amazing guy. I love him so much. I love Mandy so much. I'm really happy that they're going to be joining the club!"

In case it's not obvious, nope—Mandy Moore hasn't come clean about her engagement yet. Though E! reports that her musician boyfriend asked to marry her at their house. Too cute.