In case you're one of the few people who isn't on 24/7 royal watch, Prince Harry is currently in Canada to kick off the Invictus Games—which happens to be a really good excuse to hang with his Toronto-dwelling girlfriend Meghan Markle.

Not only were the pair photographed together at the games (well, they were sitting four rows apart, but still), Harry's said to have flown in early and visited Meghan on the set of Suits. Turns out he took an under-the-radar trip to the set of the USA drama, and kept things pretty chill.

"He was super low-key, met some crew and was so happy to watch his lady," a source toldHello! Magazine (via The Daily Mail). "He's incredibly supportive of her work."

Meghan reportedly gave her boyfriend a tour of set, and naturally everyone fan-girled: "Meghan showed him around set," the source says. "Everyone was so excited." 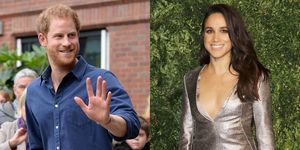 Could Harry and Meghan Move into Clarence House?