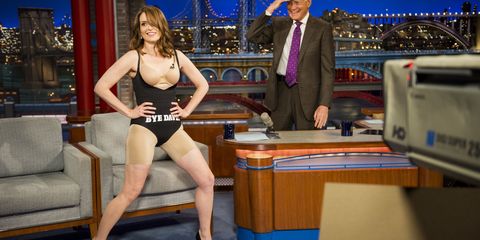 Despite what they say, diet and exercise still can't get you a line smoother than a Richard Serra—for that, you need industrial-strength nylon. Here, 14 celebrities on the miracles and slightly less magical sensations of shapewear.

1 of 14
Chrissy Teigen (and Kim Kardashian)

Although Teigen professed to not being a Spanx wearer until after baby Luna's birth ("It looks great on the outside, but trust me, I'm a bit soft"), she does have an incredible anecdote about the part the underwear brand played in her friendship with Kim Kardashian. "You made me feel so much better because we went to the bathroom and you had me zip you up," she said in the above video. "And I was like 'Oh my god, she has Spanx on! She's cool. She's normal."

Speaking of great stories, here's one Davis told us involving a public toilet, the boa constrictor of clothing, and some overzealous fans. "So I went into the bathroom stall, pulled my Spanx down—two of my Spanx down—and as I sat on the toilet, they said 'You're Viola Davis!'" To hear how it ended, head this way.

Most of us would save the shaping briefs for a special occasion, but maybe Allison Williams will persuade you to make them a daily occurrence. "This is my gift to you: Spanx makes the most incredible exercise spandex," she said in an interview with Harper's Bazaar. "I wear them almost every day. They have a little control top, so they're flattering. I'll often stay in exercise clothes all day, which I know is a faux pas."

Ouch, but also, trying this.

"Sometimes I wear two pairs of body shapers on top of each other—especially when I am heavier, I def double it up," she wrote on her app. "I put one pair on after the other, and if there's a longer pair, I always put those on first. But usually, I wear two pairs that are the same length. I try not to layer two different lengths, because I don't want there to be visible seams; I want there to always just be one seam."

Octavia Spencer tops Kim Kardashian's record, ringing in at a whopping *three* layers of compression. No wonder she had trouble celebrating at the Oscars, as she said in the above clip. "Ohhh, Ellen. Let me tell you, I could not party that night, because I was being pinched in places I didn't know it was possible."

But Adele, with "three or four pairs" on for the 2012 Grammys, wins the round."I actually had another dress made...and I ended up passed out in it," she said in an interview with Matt Lauer. "I had a corset on so I was like, 'I can't wear that.' So I ended up wearing it on short notice." We're getting sweaty and chafe-y just thinking about it, but you might be relieved to know she removed some to perform.

As with many things, most of them adaptogen-y, Goopy was ahead of her time.

"There are these great things called Spanx, and they just squeeze you in," she said way back in 2006. "It's terrific! That's how all the Hollywood girls do it!"

But Jessica Alba might have been the *real* Christopher Columbus of extremely squeeze-y underpants, according to Spanx's press kit. "I wore Spanx before anyone. Spanx are the only thing that smoothes out all of my lumps and bumps."

LOL. "I wear Spanx to bed," she once said to Ryan Seacrest at the Golden Globes. "My husband's like, 'What is this stocking on you?' And I'm like, 'Trust me, it's better this way.' Everything looks better with Spanx."

Another never-nude, Wright said she has Spanx on 24/7. "Always! I have to wear them all the time." Sounds...restrictive.

With a bit of verbal side-eye directed at her more tight-lipped peers, the Modern Family actress blew the industry's dependence on body shapers wide open. "I'm one of the only people that'll be like, 'I'm wearing them,'" she told InStyle. "But I guarantee you 90 percent of these women are wearing them, and they're lying about it if they tell you otherwise."

Never one to shy away from sharing her beauty secrets, Jenner touted these butt-pad-equipped shapers on Snapchat—and later tweeted the link to buy and everything.

Though she made it clear she wanted no part in the Great Baby Weight-Loss Race, Bell didn't mess around with wimpy, regular underpinnings after the birth of daughter Lincoln. "There's a great compression garment called Design by Veronique, which has post-surgical compression garments," she told E! News. "They're medical grade—they're like catsuits—and I wear them under outfits."

In honor of David Letterman's retirement/her "last time wearing a fancy dress on at talk show and conforming to gender norms out of respect to you," she took the dress off, revealing both her shapewear and a leotard printed with "Bye Dave" and #LastDressEver. Frankly, the world needed to know what we put ourselves through. 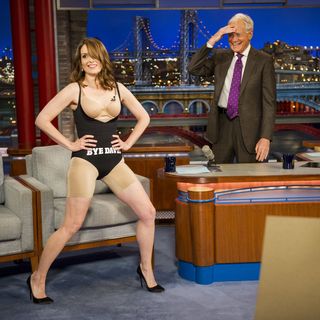