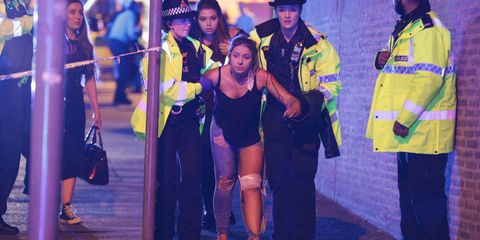 Explosions at an Ariana Grande concert in Manchester, England on Monday night killed at least 19 people and injured about 50, according to police. Witnesses reported hearing two loud bangs come from the back of the Manchester Arena after Grande's encore. Authorities have not confirmed the source of the disruption, but heavily armed police had swarmed the area. Footage from the concert shows people fleeing on foot from the venue.

A publicist for Grande told The New York Times that the 23-year-old singer is "O.K."

Loud bang can be heard in video taken outside Manchester Arena amid reports of explosion. https://t.co/zEacQKswVv pic.twitter.com/3s2Ma0FqjO

Many of the concertgoers were teenagers and witnesses reported that parents were outside the arena trying frantically to find their children, according to The Washington Post.

"A huge bomb-like bang went off that hugely panicked everyone and we were all trying to flee the arena," concertgoer Majid Khan, 22, told Britain's Press Association. "It was one bang and essentially everyone from the other side of the arena where the bang was heard from suddenly came running towards us as they were trying to exit."

Oliver Jones, 17, added: "The bang echoed around the foyer of the arena and people started to run."

One concert goer told The Guardian: "There was a loud bang at the end of the concert. The lights were already on so we knew it wasn't part of the show. At first we thought it was a bomb. There was a lot of smoke. People started running out. When we got outside the arena there were dozens of police vans and quite a few ambulances."

The chaos outside #manchesterarena when we were all trying to get out😫I hope everyone is okay ❤️ #Manchester pic.twitter.com/ISgx3AzJTF

Grande's current tour began on February 3 in Phoenix, Arizona, and was scheduled to move through Europe, including Belgium, Poland, Germany, Switzerland and France.

Sarah Rense Sarah Rense is the Associate Lifestyle Editor at Esquire, where she covers tech, food, drink, home, and more.
This content is created and maintained by a third party, and imported onto this page to help users provide their email addresses. You may be able to find more information about this and similar content at piano.io
Advertisement - Continue Reading Below
More From Culture
The Sexiest New Movies of the Year
A Look Back at Princess Anne's Life in Photos
Advertisement - Continue Reading Below
Where Is the Cast of 'Gilmore Girls' Now?
'The Bachelor' Is Back!
Who Is "Queen" Victoria on 'The Bachelor'?
Matt James' 'Bachelor' Cast: Everything We Know
Get to Know Serena Pitt From 'The Bachelor'
The Best Lesbian Movies Streaming on Netflix
Listen to the Best New Love Songs of 2021 (So Far)
Who Is Christine Chiu on Netflix's 'Bling Empire'?