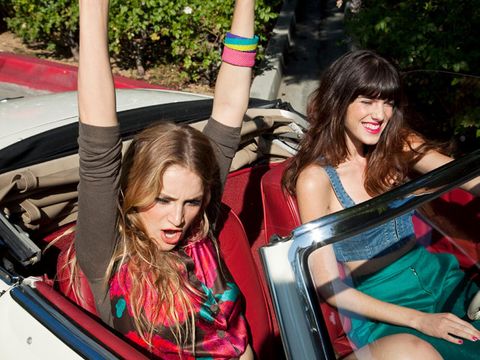 Leaving home at not-quite-18 was a hard transition. The opposite of a wild child, I was excited by my freedom but also homesick. Used to having two older sisters boss me around, I spent the next 10 years running through a series of domineering best friends. These women would take over my life—they didn't just drive me around, they wrote my term papers, picked out my outfits, directed my love life, and, later, found me jobs. One bossy-pants even used to order off the menu for me when we dined out. In her defense, I was also Eating Disorder Central.

What did my bullyish BFFs get in return? I'd provide constant companionship, and make them feel needed by being so helpless (and clueless) about life.

Inevitably, the friendship would chafe. I'd hang out with other people while my BFF would grow resentful. We'd break up—and I'd replace her with a new model.

I was close to 30 when I realized that it was possible to have close female friends without a weird power dynamic. Around that time, I had some career success. My overbearing bestie at the time told me, with clear distress, that she hadn't seen it coming. Apparently, she couldn't bear to watch me get attention. By then I had gained more confidence about my own ability to deal with adult life, and as I matured, I wanted friends to share stories, ideas, and jokes with. I sought out females with whom I had a similar attitude in life—whether it came down to shared taste in books or medical grotesqueries—and that became the glue in our relationships, rather than a need to be controlling.

Today, I have a half-dozen women who bring laughter, understanding, and companionship to my life—but who don't manipulate it. As we've gotten older, life has gotten even more complicated; time, scarcer. Many have big careers. But we're there for each other when we need to be, and in ways that count: weddings, births, deaths, job losses, promotions. But even if we go a few weeks without connecting, I know that the bond is secure. Because I've finally discovered what it means to be, and have, a real girlfriend.

Advertisement - Continue Reading Below
More From Culture
The Documentaries You Can't Afford to Miss in 2020
'Killing Eve' Season 3 Review: What's Old Is New
Advertisement - Continue Reading Below
A Super Pink Moon is Coming April 7
Pre-Order These Amazing Books Coming Out in 2020
The 8 Best Rom-Coms of 2020
Got 10 Minutes? Here's What to Watch on Quibi
We Could Be Getting More 'Tiger King'
HBO Is Making Iconic Shows & Movies Free to Watch
Tim Gunn & Heidi Klum Also Wear PJs to WFH
'Parasite' Is (Finally!) Coming to Hulu