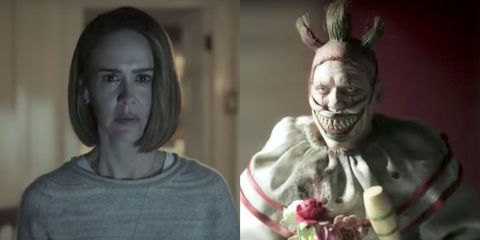 Season 7 of American Horror Story starts on September 5, and as the show's premiere fast approaches, plot points and important characters have gradually been revealed. The official trailer and the show's title sequence have caused more speculation than ever, particularly as both appear to contain some important Easter Eggs regarding the new season.

It was already clear that AHS: Cult would be terrifying, with grotesque clowns, and unidentifiable insects roaming around the promotional material. But the trailer and title sequence seem to have revealed something even scarier: the villains from all of your favorite scary movies might be making an appearance.

On the set of #AHS and they're filming at the house from the original "Halloween" where Laurie Strode was babysitting. 🎃 pic.twitter.com/RcljHV5Fdo

Back in June 2017, Bloody Disgusting reported that AHS: Cult was filming in Haddonfield, Illinois, the home of Halloween's Michael Myers.

And now, according to an eagle-eyed redditor, the latest AHS: Cult trailer features a glimpse of the actual house from Halloween at which Jamie Lee Curtis babysits in the first movie.

In the trailer, as a clown gets out of an ice cream truck, the house can be seen in the background.

And not just that. In the title sequence, one particular clown looks like he's wearing a Michael Myers' mask. Even though he's not, it definitely feels like a nod to the movie:

Pennywise from It also puts in an appearance, with one of the AHS: Cult clowns coming out of a coffin with a red balloon.

A recurring shot of a carousel in the AHS: Cult trailer is reminiscent of Silent Hill, particularly as the character standing in front of it is wearing a hazmat suit, much like an Order Soldier from the franchise.

As if that wasn't creepy enough, the silhouette of Freddy Krueger seems to appear on the carousel.

And it's hard not to read the constant bee references as nods to The Wicker Man's infamous scene.

And could the twins Sarah Paulson's character Ally spots in the store be alluding to the twins from The Shining?

And this particular clown looks like something straight out of Killer Klowns from Outer Space.

Basically, the horror movie references in the AHS: Cult trailer and title sequence aren't in short supply. If Michael Myers doesn't actually put in an appearance in the season, his neighborhood certainly will, and that's not a coincidence.

Amy Mackelden Weekend Editor Amy Mackelden is the Weekend Editor at HarpersBAZAAR.com, where she writes about entertainment, celebrity news, beauty, and fashion.
Advertisement - Continue Reading Below
More From Culture
Candice Marie Woods on Playing Diana Ross
45 Iconic '90s Movies to Binge-Watch Right Now
Advertisement - Continue Reading Below
You Can Get a ‘Golden Girls’ Birthday Party Kit
Meet the Star of 'The Bachelor's ChampagneGate
Hannah Ann Sluss From 'Bachelor' Was a Model
Who Is 'Bachelor' Peter's Mom Talking About?
Who Is Hannah Ann Sluss From 'The Bachelor'?
Who Is 'Bachelor' Contestant Victoria Fuller?
Who Is 'Bachelor' Contestant Madison Prewett?
Who Are the Women of 'The Bachelor' in 2020?