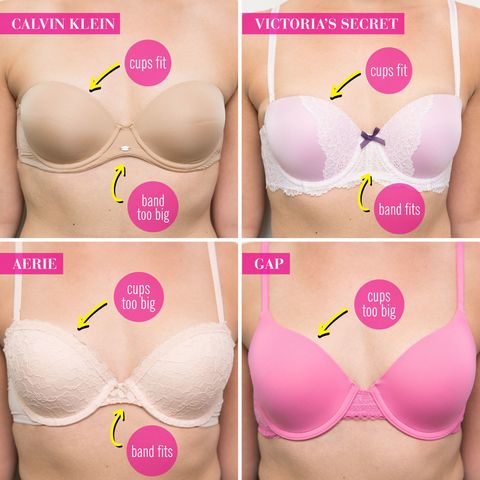 34B is one of the most popular bra sizes in the country. "That size is always the first to sell out," the Aerie saleswoman said as she checked for the size among the dozen or so lightly lined options in the store—the only ones left were in beige and black. "I swear, half the people who come in here say they are a 34B," said a saleswoman at Victoria's Secret, "and they buy that size whether it fits or not."

For the record, you know that a bra fits when the band sits securely all around your rib cage on the loosest setting (the extra hooks are there to tighten the bra as it stretches out) and the inside of the cups should have full contact with the surface of your breast without bulging or spillage out the sides.

With that in mind, Cosmopolitan.com asked nine self-described 34B's to try on bras from three of the world's biggest bra manufacturers—Victoria's Secret, Aerie, and GAP—to see how they stacked up against their own 34B bras. Some of the women had been professionally sized previously. Some had not. Some were wearing bras that were only a few months old, while others had been wearing the same bra for years, despite the fact that most bras lose their elasticity after six months to a year of regular wear. No one fit every bra. Some people didn't really fit any of the bras. Bra sizing is so weird.

In the end, many of the women found that the bands on the bras were looser than they would like, but admitted that they often fit their bras to the tightest set of hooks, rather than the loosest, which would seem to indicate that they should actually go down a band size.

Although some of the women found that the Aerie and GAP bras were too large in the cup, in most of those cases, the difference was not drastic enough to justify them going down a whole cup size. When you are in between bra sizes like that, it's actually better to choose the larger of the two cup sizes and then use pads to fill out the extra space, rather than cramming your breast into a cup that is too small.

So, long story short, bra sizing is a mess—it's completely different from one brand and one cut to the next, so even if you are a 34B in one bra, you definitely won't be in all of them. Damn it! Why can't anything be simple?

This content is created and maintained by a third party, and imported onto this page to help users provide their email addresses. You may be able to find more information about this and similar content at piano.io
Advertisement - Continue Reading Below
More From Fashion
Anya Taylor-Joy Was a High-Fashion Princess
Kathryn Hahn Is Dressed to Perfection
Advertisement - Continue Reading Below
The Best Red Carpet Looks at the 2021 Emmys
Dior Photography Award Winner Shares Inspirations
We're Living for This Blast-From-the-Past Fashion
The Leggings You Want When the Weather Gets Brisk
Emily Blunt Is a Modern-Day Ziegfeld Girl
AOC Wore a Dress With a Stark Message
Ella Emhoff Is Fashion's Chicest It Girl
Serena Williams Glows In a Bodysuit and Feathers