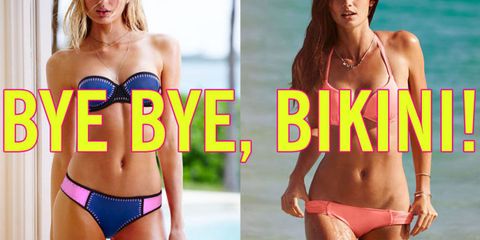 Victoria's Secret is almost as well known for swimsuits as it is for lingerie. For the last two years, the brand has even produced a splashy TV swim special for CBS to showcase the collection. That's all over now, though. According to BuzzFeed News, Victoria's Secret will stop selling swimwear after this year, replacing at least some of that space in its stores with activewear.

Les Wexner, the CEO of L Brands, said in a statement earlier this month that the company was "making these changes to accelerate our growth and to strengthen the business for the long term by narrowing our focus and simplifying our operating model."

Charles Manning Style Director I'm 30 percent bunnies, 40 percent of the time.
Advertisement - Continue Reading Below
More From Fashion
Stock Up on Cute, Flirty Summer Dresses
Cartier Women's Initiative Announces Its Finalists
Advertisement - Continue Reading Below
What Marie Claire Editors Wore to Get Their Jobs
Is the Next Big Wedding Trend Reversible Gowns?
Our Favorite Throwback "It-Bags"
What to Buy at Nordstrom's Spring Sale
The Best New Spring Shoes to Treat Yourself To
We Found the Best Modest Swimsuits for Summer
Fashion Comes Together to Fight Coronavirus
Your Official Guide to the Royal Family's Tiaras