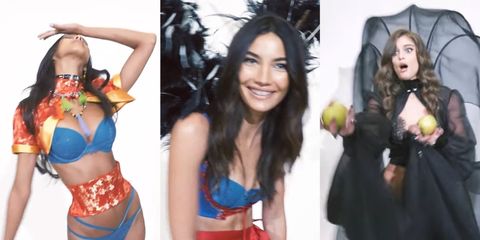 Victoria's Secret models get paid to make you believe they're impossibly perfect women with crazy bodies and unrelenting smizes. But behind the scenes, they're acting like they're nothing like the glamazons they play on the catwalk.

A few of them try juggling, with little success. Too many balls flying!

Sara Sampaio reveals she can make one of her eyes go cross-eyed:

Some wing wiggling happens. "Maybe I can fly today."

Martha Hunt twirls around in her look, making herself laugh after she says, "It's like Pocahontas meets Jasmine and they're going bull-riding." Flippantly smashing together cultural references: OMG, hilarious! From the look of some of these oufits, there might be a questionable theme happening — let's ready ourselves for that possibility.

Lily Aldridge does her best "Blue Steel" and jokes that she'll roll down the runway in a chair:

Lest you forget that they're Victoria's Secret models, there are some traditional strut-strut moments to remind you:

Helin Jung Helin Jung is a writer and editor based in Los Angeles.
Advertisement - Continue Reading Below
More From Fashion
Spring Dresses to Beat the Winter Blues
Katie Holmes Wore a Cool Pair of Oxford Shoes
Advertisement - Continue Reading Below
What the Founder of Lingua Franca Wears to Work
The Best Grammys After-Party Outfits
The Spring Trends That'll Shake Up Your Wardrobe
Behold: The Sexiest Looks at the 2020 Grammys
The Best Red Carpet Looks at the 2020 Grammys
Shop Kate Middleton's Personalized Charm Necklace
PSA: Anthropologie Is Having a Sale All Weekend
Treat Yourself to These Pretty Lingerie Pieces