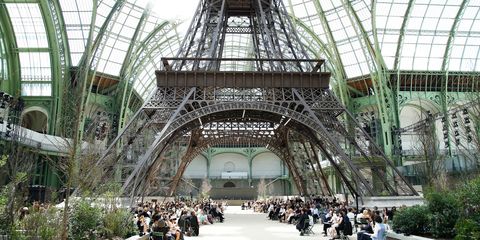 Today, Chanel took over Paris' Grand Palais for its Fall 2017 couture show. From the Parisian-inspired set to Karl Lagerfeld receiving a very special honor, here's everything to know from the show.

1) The set was inspired by the iconic fashion house's home-base: Paris. Models walked underneath a giant Eiffel Tower replica that was created to overarch the runway.

3) Every look was topped off with a boater hat. Karl Lagerfeld is bringing the early 20th century hat back. The accessory was presented in a variety of tweeds, satin and leather.

4) The collection itself featured a somber color palette of grays and blacks. The first 25 looks were all variations of gray, later leading to head-to-toe black ensembles and a gorgeous Chanel bride in all-white for the finale. Much like the hats, the designs were a nod to the elegance of an early 20th century woman.

[instagram align='center' id='BWHpdh9AKUl']5) But the makeup was a technicolor dream. Every model's look featured an over-the-top rainbow eyeshadow, a bright and welcome contrast to the dark-hued collection.

6) At the end of the show, Karl Lagerfeld received the highest honor of Paris. The city's mayor Anne Hidalgo presented the designer with a Grand Vermeil medal, the highest distinction the city offers, for his work in the French capital.

This content is created and maintained by a third party, and imported onto this page to help users provide their email addresses. You may be able to find more information about this and similar content at piano.io
Advertisement - Continue Reading Below
More From Fashion
Dior Photography Award Winner Shares Inspirations
We're Living for This Blast-From-the-Past Fashion
Advertisement - Continue Reading Below
The Leggings You Want When the Weather Gets Brisk
Emily Blunt Is a Modern-Day Ziegfeld Girl
AOC Wore a Dress With a Stark Message
Ella Emhoff Is Fashion's Chicest It Girl
Serena Williams Glows In a Bodysuit and Feathers
Maisie Williams Is Unrecognizable
Amanda Gorman Channeled Lady Liberty
Nia Dennis Did a Gymnastic Routine at the Met Gala