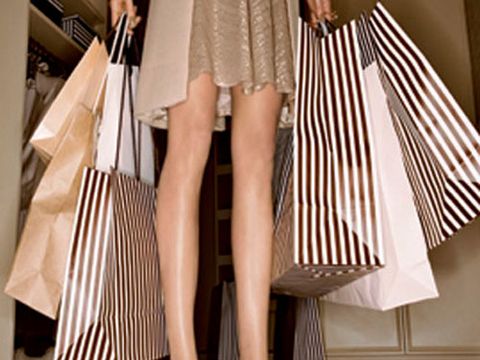 On average, women spend about 102 minutes shopping per month, while men spend a mere 60 minutes (according to Women's Wear Daily). Is it any wonder we go to extreme measures to make the most of those precious 1224 minutes a year?

"I know I can put my cable bill off another week, but that sweater might be gone if I wait any longer."

I make sacrifices in other parts of my life to make up for my expensive clothing purchases. There's an urgency to my shopping. I like the feeling of buying stuff and having it in my possession. That's where the sacrifices come in. A fancy sushi dinner can wait, but those Giuseppi Zanotti shoes--my absolute favorites!--can't.

After I've made a purchase, though, I'll continue to think about it later that day or even later that week. I feel guilty, especially when I see it in my closet. Then I make trade-offs to make myself feel better. For example, clothes from H&M, Forever 21, or other inexpensive stores compensate for the Manolo Blahniks I had to have.

I recently bought some $25 Dior mascara at Sephora. To compensate, I ate a $2 slice of pizza for lunch instead of a healthier, more expensive salad. I also rationalize that I'll be the only person to ever have certain items, so it's worth the money, and I'll find an occasion to wear them. I bought a long, black, flowing evening gown a while back. It's so beautiful. I convinced myself that one day I will be invited to a black-and-white ball, and I'll have the perfect dress. So far, I've waited a year-and-a-half to wear it.

I love expensive bags and shoes, but I specifically choose accessories that will last. And once I've accepted my pricier purchases, I feel like I've gotten a deal with less-expensive items. I may pay a bill late and have to stay in and order Chinese instead of going out, but it's worth it in the long run!THE CLOSET CONSUMER

"I'm not trying to spend all of our money, but I don't like being monitored."

While I love shopping, I feel like I'm being accused when my husband points out that I'm wearing something new. We have been married for just over a year. We each have our own bank accounts, but we share a credit card--and a closet. He encourages me to use the card for purchases so we can earn frequent-flier miles, then he usually pays off the bill (he earns much more than I do). So, technically, using the card is spending his money.

On the rare occasions that I do charge something, I'll go online and pay that amount right away, from my bank account. But he sees the statements. I'll say, "Well, these jeans were $200, but that just means I have to wear them 20 times and then they basically pay for themselves." It has become a little game we play. He'll ask, "So how many times do you have to wear those shoes?" I guess it's sort of silly, but it makes it a little easier when I have to own up to my latest buys.

We recently had a talk about money and decided to buy fewer "frivolous" items. A week or so later, he spotted my new J.Crew pumps in the closet. I had actually bought them before the argument, but I hadn't brought them home until recently. I told him they were old, but who knows if he believed me? I think I've developed a complex: Shopping is still a pleasure, but now, it's a guilty one.

"I often spend more than nine hours at a time shopping online."

I visit my favorite shops at least 10 times a day--online shops, that is. I shop so much and so often that going to physical stores would be impossible. The Internet is faster and easier. I have 24-hour access, and there's never a sales clerk breathing down my neck.

My favorite sites are bookmarked on my computers at home and work: blaec.com, shopbop.com, factory people.com, anthropologie.com, neimanmarcus.com, bloomingdales.com, and saks.com.

I spend most of my free time--my lunch hour, after work--shopping. I recently saw someone on the street wearing a great pair of jeans. I asked her where she got them, and once I found out, I was obsessed. I woke up at 2 a.m. haunted by these amazing jeans, so I went online and bought a pair. I probably spend $1200 a month. I receive so many packages--at least two a week--that it's like Christmas all year round. My mailman thinks I'm crazy. I have to track my packages online, too; I once realized a pair of shoes I had bought were still missing four months after I ordered them.

I did venture into H&M for the debut of Stella McCartney's line. I was trampled and pushed, all in the name of fashion. Prior to that day, it had been almost a year since I'd purchased an item in a store, and the experience was enough to scare me back to the Web for good!THE SOLO SEEKER

"I live with four other girls. There are always comments on my clothing."

I shop alone, and with good reason: When I try on clothes in the dressing room, I spend at least 10 minutes with each item. I like to see how the clothes fit from all angles. I'm also a picky shopper, so I end up trying on a lot of things but buying very little. My friends don't have the patience to shop with me, but the feeling is mutual: I don't like to hear what they have to say about my choices.

br/>I plan my store route before I head out, which can be difficult when shopping with others. I don't spend hours planning my purchases, but I may have in mind a certain top or a particular pair of jeans I've been eyeing. The first place I usually head is Pookie & Sebastian, a small chain of boutiques in Manhattan, where I almost always find something great. I sometimes ask for strangers' opinions when I'm there-- they tend to be more helpful than my friends, because they don't have a biased opinion of me or what I've chosen.

I look forward to shopping. I use that time to relax and focus on myself. Though I enjoy helping others find things for themselves, when I'm buying my own stuff it's nice to be free to go wherever I please, on my own schedule, and shop at my own pace. I wouldn't have it any other way.

"There's too much pressure to find the right thing."

Shopping is very stressful for me. I like thinking about discovering new clothes, and I like bringing new pieces home, but it's getting the clothes that's frustrating. If I set aside time specifically for shopping, I don't come home with anything.

I often see something and think I like it, but I'm not sure, so I carry it around the store for a while--maybe an hour, sometimes two--trying to figure out whether I should buy it. The questions set in: Do I really like it, or do I just like the price? Is it a waste of money? Will I like it next week? Would I like something else better? You could say that I have a hard time making decisions.

I'm embarrassed by my indecision, but I can also laugh about it. I warn every sales person ahead of time by saying something like, "I'm sorry. I tend to be indecisive and can take a long time." It does make me uncomfortable sometimes; I feel like some sales people get annoyed and think, Just make up your mind!

I went shopping for cowboy boots last year and tried on about 40 pairs. I narrowed it down to three. I had been there for about an hour. The salesperson was ready to lock up, and I still couldn't make up my mind. I felt guilty. Still, I continued to pick them up, look at them from every angle, walk around in them. He said he needed to close the store and would give me 20- percent off if I decided on the spot. It got to the point where I thought maybe I didn't want any boots at all. But I ended up buying a pair--and I wear them all the time.

Advertisement - Continue Reading Below
More From Fashion
Katie Holmes' Stylist Revolutionized My Wardrobe
Iconic Shoe Designer Sergio Rossi Dies at 84
Advertisement - Continue Reading Below
Up Your Trench Coat Game: Our 17 Picks
Trade in Your Tattered Wallet for These New Styles
The All-Time Best Online Thrift Stores
Anthro Is Taking 40 Percent Off WFH Essentials
A Podiatrist Shares Tips for Buying Comfy Heels
The Most Daring, Sheer Celebrity Outfits Ever
Free People's Jeans Sale Is Giving Me Life
The Item I Wear to Death: My DVF Camel Coat