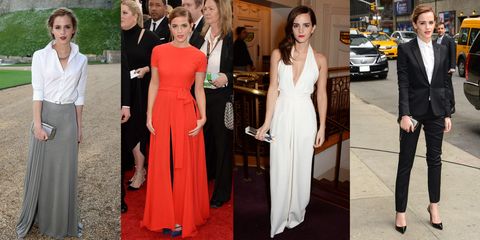 Emma Watson is a young lady of many accomplishments. She's been cast as a Disney princess (in Beauty and the Beast naturally), graduated from an Ivy League school, and has launched a global gender equality movement for the United Nations with HeforShe. And sartorially, she's just as prolific, wearing suits, gowns, and LBDs perfectly. No wonder she was recently named the world's most outstanding woman. See all her best looks.

In a Gabriela Hearst dress, Behno coat, Paul Andrew shoes, and Stella McCartney bag at a screening of The True Cost

In Beverly Hills, filming for her upcoming movie, The Circle.

Arriving to the set of her upcoming film The Circle in Los Angeles.

Filming her upcoming film The Circle in Los Angeles.

In an Isabel Marant sweater, out shopping in London.

Out in London in a Saint Laurent blouse.

In a Misha Nonoo jumpsuit with an Anya Hindmarch clutch at the British Style Awards in London.

In Balenciaga at the BAFTA Britannia Awards in Los Angeles.

In a Dior coat and dress after her 'HeForShe' speech at the United Nations in New York.

In Valentino at the Valentino Couture show at Paris Fashion Week.

Outside the Dior Haute Couture show at Paris Fashion Week.

Outside the Giambattista Valli show at Paris Fashion Week.

In Narciso Rodriguez at the premiere of Boulevard at the Tribeca Film Festival.

At the airport in Los Angeles.

In a J.Mendel jumpsuit and Gianvito Rossi heels at the Madrid premiere of Noah.

In a Wes Gordon dress, Christian Louboutin heels, and Ana Khouri earrings at the Berlin premiere of Noah.

In a Giambattista Valli Haute Couture dress with Christian Louboutin shoes at the ELLE Style Awards in London.

In a Dior Couture dress and pants with Roger Vivier shoes and Dior earrings at the 71st Annual Golden Globe Awards in Los Angeles.

In J. Mendel at the Gravity premiere in New York.

In Christopher Kane at a photocall for The Bling Ring in Cannes.

In Prabal Gurung at the "Punk: Chaos to Couture" Costume Institute Gala at the Metropolitan Museum in New York.

In Dior at a screening of The Perks of Being a Wallflower in London. 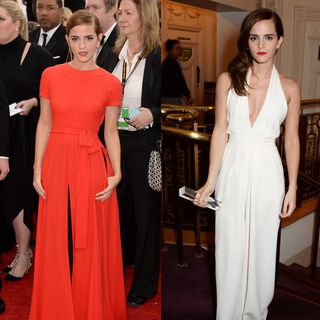