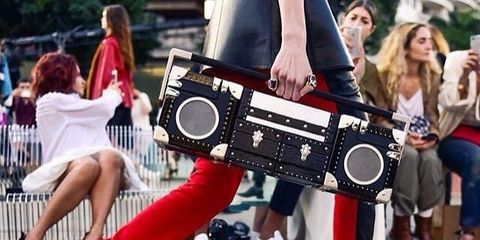 The 2017 Louis Vuitton Cruise show just took place in beautiful, sunny Rio de Janeiro, Brazil. The celebrity-studded show was held at the Niterói Contemporary Art Museum (also known as the MAC de Niterói) which was just as stunning as the clothes. Nestled between the Guanabara Bay and the Atlantic Ocean, the futuristic building provided breathtaking views from all sides. See all the big moments and Nicolas Ghesquière's latest work below.

Following Chanel's Cruise show in Cuba earlier this month, Louis Vuitton is the latest brand to take it's collection on a tropical getaway.

The brand posted these race-car-like graphics on Instagram the day before the show with the caption "The races begin!"

The Show was Held at the MAC de Niterói
@louisvuitton/Instagram

According to WGSN, it's the first time the museum has hosted a fashion show since it was built in 1910, but not opened until 1996. This year marks its 20th opening anniversary.

The Winding Walkway Made for a Stunning Catwalk
@bazaarargentina/Instagram

The guest seats at the end of the path were set up in a pattern mimicking the walkway which also took advantage of the circular, water-lined path at the base of the building.

The Accessories Were Bright and Colorful
@carolinaxoneill/Instagram

And the Race Car Motif Continued with the Bags
@thepopmag/Instagram
But the Real Show-Stoppers Were These Boombox Trunks...
@i_d/Instagram
noormagazine/@Instagram
Louis Vuitton's Latest It Girl Alicia Vikander Attended...