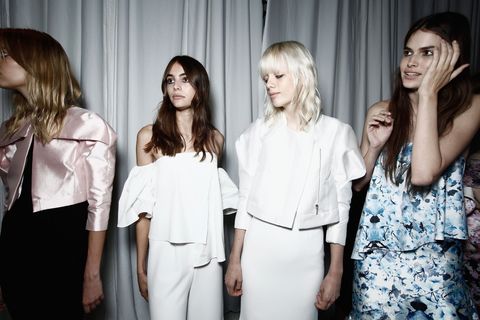 Social media might have made New York Fashion Week more complicated (it's faster than ever to produce knockoffs now, people are like "What? I just saw this, but I have to wait six months to buy it?"), but out of its struggle comes a very important job for a group of consultants: Fix NYFW or die trying.

WWD reports that the Council of Fashion Designers of America has hired the Boston Consulting Group, which may reposition NYFW as a consumer-driven event that will show "buy now, wear now" merchandise to the public, while editors and media preview next-season collections at presentations or showroom appointments. That way, the focus returns to what Fashion Week has always been about: the clothes.

But don't start crafting a dress from hoverboard parts just yet. The upcoming February season won't be affected, and CFDA CEO Steven Kolb floated the possibility that "they might come back and say, 'There's nothing to fix. Keep it the same.'"