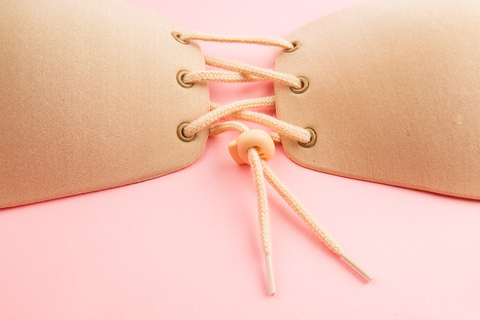 The creation of the corset dates back to 2000 BC and possibly even further. The push-up bra (originally called the "Rising Star) was invented in 1946 by Frederick Mellinger. Having stumbled upon what I believe to be the first true hybrid of these two gravity-defying underpinnings, I can't believe it took so long for these two like-minded inventions to come together. I mean, has Kim Kardashian got her hands on one of these things?

Because Korea seems to be at the forefront of beauty and fashion tech alike, I discovered this engineering wonder on K-fashion site Somethin' Sweet. Created by CHUU, it's called the Corset Nubra and it's basically two adhesive, wing-shaped chicken cutlets connected by lace-up detail you can tighten or loosen with a drawstring button. It's designed to be worn under your regular bra, which is great news if you hate going strapless (like me!).

Perhaps the craziest part of all is that the Nubra only costs $12 for us here in the U.S., the catch being that you will have to pay for international shipping. But that's not *too* bad, considering it could be a total game-changer for your cleavage as evidenced by the before and after below.