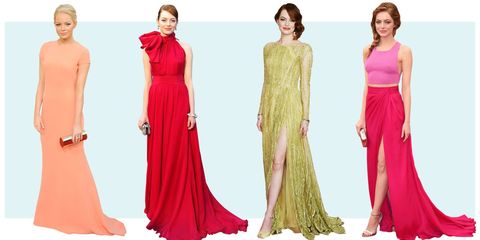 On top of being Hollywood's most down-to-earth PYT, Emma Stone is also one of the biggest risk-takers on the red carpet—much to our sartorial delight. Because every day is a day to celebrate her impossibly chic style, we're looking back at her top 25 hall-of-fame looks to date.

Pulling off the ever-challenging high-low silhouette, she makes a serious fashion statement in this embellished burgundy Chanel gown.

Her hot pink lips pop beautifully against this strapless floral Lanvin number at the Met Gala.

Always one for a color-blocked moment, Stone is ladylike in this red/fuchsia Giambattista Valli top and skirt at the Friends With Benefits premiere.

Packing on the drama by way of the hips, she seems effortlessly cool in a lacey Tom Ford cocktail dress at the Crazy, Stupid, Love premiere.

Stone is decidedly retro in this open-shouldered, polka-dot Luca Luca gown at The Help premiere.

Stone's simply a standout at the Golden Globes in this plunging plum gown and belt by Lanvin.

One of her most memorable looks to date, she exudes elegance at the Oscars in this vibrant Giambattista Valli Couture halter gown with bow detail at the neck.

She gets dressed to the nines for the Vanity Fair Oscars after party in this black Chanel gown with ornate detail.

The ultimate Lady in Red, Stone achieves cute-meets-vampy in a scarlet Lanvin mini-dress at the Met Gala.

Stone proves a jumpsuit can be just as formal as a gown in this embellished, deep-V Elie Saab jumpsuit at the Amazing Spider-Man premiere.

Channeling a Roaring Twenties move star, she sports a wine-hued lip and this black Gucci gown with bloom embroidery.

Never one to shy away from accessories, she's head-to-toe perfection in this Lanvin sweetheart dress, jeweled statement necklace, and crystal brooch belt at the Gangster Squad premiere.

For The Croods premiere, she takes another risk in this Gucci LBD with honeycomb tulle and puffy sleeves.

For her big night at the Birdman premiere, she's a classic beauty in this hunter green tulle gown by Valentino.

At the Berlin premiere of The Amazing Spider-Man 2, she stuns in Chanel wearing a gold-fringed print top and breezy mauve skirt.

The epitome of simple elegance, this cream, chain-strap Prada gown was a perfect choice for the Amazing Spider-Man 2 premiere in NYC.

Pulling off a crop top and skirt with ease, she's striking in this saccharine Thakoon look at the Met Gala.

She's a best dressed shoe-in in this embellished silver and black Lanvin jumpsuit at the Golden Globes.

A true red carpet risk-taker, Stone killed it at the SAG Awards in a black Dior blazer and chiffon train.

A vintage-inspired vision, she goes classic at the Oscars in this beaded yellow Elie Saab number.

Stone brings back the glamour of the '90s in this high-neck Christian Dior gown at the Irrational Man premiere.

Going big for The Amazing Spider-Man 2 world premiere, she knocks it out of the park with this bright yellow Atelier Versace gown.

Next
Celebrities Who Only Ever Wear One Kind of Dress 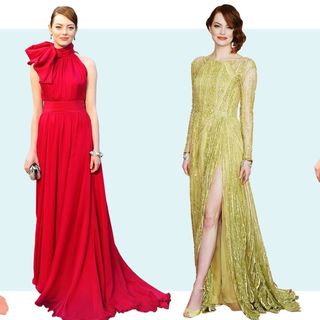 Advertisement - Continue Reading Below
This content is created and maintained by a third party, and imported onto this page to help users provide their email addresses. You may be able to find more information about this and similar content at piano.io
More From Fashion
Black-Owned Shoe Brands You'll Fall In Love With
The Best Black Jeans to Build Your Outfit Around
Advertisement - Continue Reading Below
Our Favorite Summertime Pajamas
The Dreamiest Tie-Dye Swimwear for Summer 2021
Embrace In-Between Season With a Trench Coat
Comfy and Stylish Sandals to Walk a Mile In
The 26 Best Leggings, Based on Ratings and Reviews
Your Guide to Spring 2021's Wardrobe Essentials
A Sleek Coat Is Chloe Gosselin's Power Pick
Inspiring Mother-Daughter Owned Brands