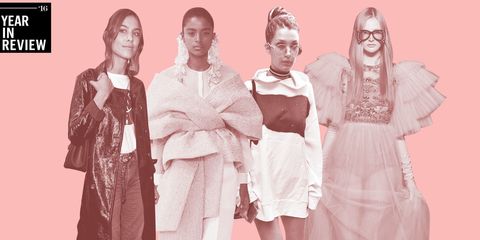 As if it saw the light at the end of the tunnel—spoiler alert: It was a runaway train called the Trump Express, with Tomi Lahren bringing up the caboose—fashion responded in two opposite ways: an overall slackening (comfort in times of trouble) but also individualistic ostentation (live it up while you still can). Here, seven definitive trends that represent both ends of the spectrum and one of the most WTF years in human history.

Blame Vetements. Or, like, louche sadness when you've put yourself on bed rest for a few weeks after the election but have finally managed to get up because the world isn't going to change itself.

If you were to soundtrack 2016, especially the end bit, it would be Elliott Smith and death metal, even though 98 percent of the youths wearing these T-shirts ad hoodies would be hard-pressed to name even one track. But good on this whippersnapper for the pussy-bow blouse, also extra timely.

Again, the Vetements argument, but also Yeezy, but also when you want to pad around your apartment with tears streaming down your face but you also want to go out.

10 of 21
Oversize Sweatshirts and No Pants

What? Is this not the definition of "home clothes?"

And on the side of things, we've got puffs and swaths of extra fabric protruding from our shoulders and arms now. It's an issue of space and who's allocated how much, as I discovered when I wore a huge gown with a train and called it permanent manspreading. (Definitely not as problematic as real manspreading, an epidemic that will now only worsen as time passes.)

The easier to take out before you fight someone for trying to infringe upon your rights. (More here.)

19 of 21
Patent Leather, or the Nasty Woman's Choice Fabric

Slick, sexy, but also vaguely militant in a flasher trench, cigarette trousers, or a skirt. (Further analysis this way.) 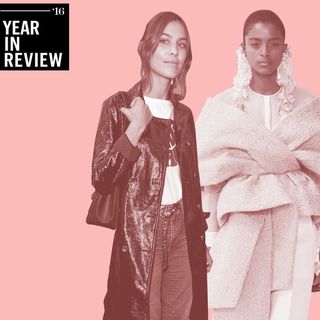