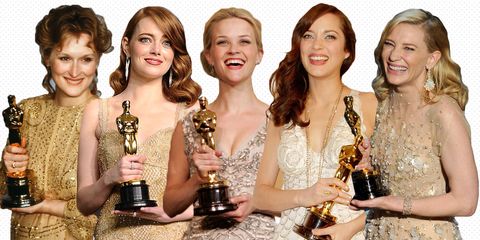 Just about every year, someone arrives on the red carpet in a metallic dress, and somebody else makes the usual crack about "does she actually think dressing like an Oscar will win her one?" and manifestation and how woo-woo these Hollywood types are. But could it be real? An intensive visual investigation featuring seven Best Actress nominees right this way.

Comments: This is glitzy but also like a caftan, which is chill. Like an Oscar on vacation in Maui. And for those interested, her hot date is Don Gummer.

Comments: The sculpted bodice of her bespoke, butter-yellow Valentino does skew rather statuette-y, but this is more one of those instances where everything is super thought-out: You can clearly see the 1930s reference, which is also a reference to the movie. Clever!

For: Walk the Line

Comments: It might read twinklier in photos than IRL, but that could just be the patina on this vintage Christian Dior. Which actually makes it more statue-like, whoa.

Comments: This mermaid-esque Jean Paul Gaultier is very sculpted, which in turn makes you think, "Wow, that little gold dude does have quite a sexy shape." (Don't think about it too much. Please.)

For:  The Blind Side

Comments: You can't un-think it, can you? This Marchesa is divine, though. (But also, who sees a film award and goes "Gee, that reminds me of my UNCLE?")

She did! She won!

For: The Iron Lady

Comments: The thing is, if you wear any other metallic shade and you're up for a win, they will make this comparison. Even if your gold lamé Lanvin is more Greco-Roman than Buff Relative.

Comments: The definition of statuesque in Armani Privé, jeez.

Yes! Look at that twirl.

For: The Danish Girl

Comments: Belle (as interpreted by Louis Vuitton) before Leslie Mann was Belle—or Emma Watson, for that matter—but the color is what does it. (Actually, maybe twirling is part of the voodoo here too, hmm.)

Comments: And in what might be the Oscar-iest cosplay yet, she dresses up in Givenchy couture, the fringe on which would make you weep.

You know she did.

Next
What Everyone Wore to the Oscars After-Parties 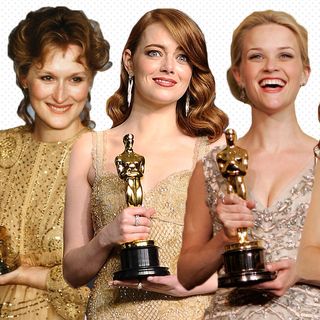