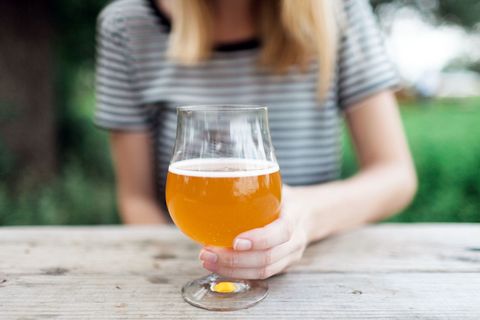 I love beer. A lot. And as a beer lover I know that among us, we tend to have a lot of opinions about beer. Best breweries? You could get us talking for days and days and days. I get that. But for those who are 1) open to some new recs and/or 2) not beer know-it-alls (#Bless), a look at *just some* of the best breweries in the U.S. to knock some back—er, we mean, savor the goodness. (And before a full-on fight breaks out—you're right, you're right, how could I miss [insert favorite brewery here]?! Totally, my mistake.)

Crowds drive into Monson and up to the third-generation Western Massachusetts farm to imbibe some pretty spectacular beers. Opened in 2012 as a draft-only brewery (it now has cans), they rotate offerings and, yes of course, growlers are available. We recommend the (notable) Julius IPA, which has notes of passionfruit, mango, and citrus.

Ma, our beloved Hoppy Amber Ale, into kegs and on for fills this fine evening!

Launched in 2010, this brewery tends to be the one cited as helping to put Vermont on the beer map. While many breweries are popping up in the area (and, yes, they're all pretty great), Hill Farmstead is just consistently good and features great a great Abner double IPA and great saisons...and great porters...you get the gist.

Opened in 1995, Dogfish Head has established itself as one of the best (and biggest) craft breweries in the nation that often tries "experimental" beers to up the ante. It's definitely not a small mom-and-pop operation, but that doesn't mean it doesn't make great beer—try the 90-Minute IPA and the Raison d'Extra (a Belgian-style brown). Did we mention it's a James Beard 2016 nominee?

Another large operation, this favorite opened up in 1988 and is still going strong. Pilsner and ales are offered throughout the year, with one-offs and specialties offered in the taproom and at nearby bars. Garrett Oliver has served as the Brooklyn Brewery brewmaster since 1994, and has been a judge at the Great American Beer Festival for 11 years.

It's a little surreal to be wearing gloves while unpacking Summer Ale cans, but it's totally worth it for our Summer in Winter Party at @websterhall this Sunday. Visit our profile for tickets. #nycbeerweek #nycbw (Regram: @nycbeerweek )

"It's A+!," one editor told me, and I have reason to believe her, considering it's often ranked as one of the top craft breweries in the United States—and it only opened in 2014. (Yes, truly.) It made its mark by opening up in a great space (an old Chevy warehouse) and churning out great offerings, including an award-winning American Brett—Curiosity No. 2, a blonde American Brett refermented with kiwi and pineapple juice.

Compared to many on this list, this brewery is *pretty* small. But considering I'm from South Bend, I had to give this small-but-mighty knockout a shout. In the home of Notre Dame, this brewery and ale house features great, seasonal rotations and small batches, including standout IPAs and stouts. (The food is A+ as well.) Opened in 2015, this is one to watch.

You can't talk about Chicago beer and *not* mention Half Acre. While the city has a soft spot for Goose Island (acquired by Anheuser-Busch InBev in 2011, so no longer a craft brewery), Half Acre, Revolution, Metropolitan, etc. etc. have been holding it down. But Half Acre (founded in 2006) consistently ranks for top U.S. breweries thanks to, well, great beer. (Try the Daisy Cutter, which if you're in town, you'll see everywhere.)

This is an imperial pint of Lager, the very first Half Acre beer. Get into it now, in our tap room or shop.

Technically in Indiana but having strong Illinois/Chicago ties, this brewery is one of the longest running on the list—founded in 1996 with only a few hundred dollars, it features pretty out there brews and  Zombie Dust and Dark Lord Imperial Stouts are *musts*, trust. (That is, if you can get Dark Lord. It's sold at the brewery only on "Dark Lord Day", the last Saturday in April, and attendance is now limited to 6,000 pre-sold tickets. For real.)

If you're a beer lover and not into the Michigan scene, you're missing out. There are a *ton* of great breweries in the Mitten State (not technical name, but whatever) allover, but especially in Southwest, MI. (Think: Three Rivers, Kalamazoo, Grand Rapids...) Founders in Grand Rapids is great, while Bell's is beloved for its seasonal offerings—including its Oberon Ale, which often marks the beginning of warm weather for Midwesterners, as it's available from late March through August.

The first brewpub and microbrewery in Ohio, Great Lakes Brewing Company was founded in 1988 and offers free tours and a patio (AKA win/win). They offer year-long and seasonal beers, as well as pub exclusives available only on tap in select Northeastern Ohio bars. Try their best-seller—the Dortmunder Gold (a Dortmunder-style lager) and if you can, the Christmas Ale, their second-biggest seller and a seasonal ale produced for only eight weeks. (Pssst...you'll need to visit. Most of it never leaves the Cleveland area.)

Phil Wymore (once Goose Island's cellar master and head brewer at Half Acre) (see: small world) paired up with Cory King, a homebrewer, to open Perennial Artisan Ales in 2011. A small-batch brewery with a tasting room, beers are often influenced by Belgian and American craft styles, but with a twist. In other words: *Gulp.*

There are so many great breweries in Colorado, but Avery Brewing sets itself apart from the pack with great, inventive beers. Founded in 1993, its core beers include an India Pale Ale, a White Rascal Belgian-Style White Ale, and a brown ale. Basically, everything's drinkable, and it's an easy introduction for those who are beer-wary.

Big Sky Brewing was founded in 1995 and is the largest brewery in Montana. It brews six different styles of beer along with some specialties, but its most known for its brown ale—Moose Drool. (Yes, that's the real name.)

Portland is one of those towns where you throw a stone any direction and you'd hit a brewery. (But don't do that.) However, Breakside Brewery is notable for a slew of reasons. But we'll let the accolades speak up now (or forever hold their peace): Brewery of the Year by Oregon Beer Awards in 2015, Best Beer in Oregon by The Oregonian in 2015, gold medals for its IPA at both the Great American Beer Festival and the North American Beer Awards in 2014...we could go on, but we won't. In other words—try the IPA.

Founded in 2010, this farmhouse ale-driven brewpub is one to visit. (Seriously, in Texas it's rare to find bottles on shelves.) It offers free tours and is known for its wild ales and spontaneously fermented beers. Our rec—try the sours.

This microbrewery founded in 2010 is all about the community of beer—with seasonal specials, food trucks, live music events, and even yoga scheduled at the headquarters. Go for the elevated IPA, stay for—well, the IPA and everything else along with it.

This brewery founded in 1997 has earned its place on this list for its Pliny (the Elder—a Double India Pale Ale, and the Younger—a Triple India Pale Ale). But in all reality, everything is just good. (Pssst...its barrel-aged brews all end in "tion", and are all worth a try.)