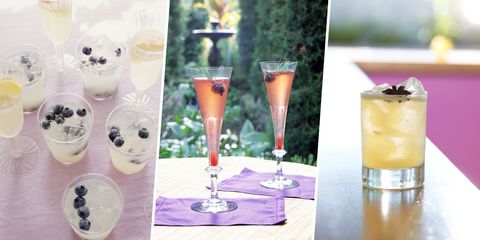 Prosecco, how do we love thee? Let us count the ways...The sparkling Italian wine is the drink we know and love in our brunch-time bellinis and as an every-day choice for a bubbly pick-me-up. Here, five of our favorite prosecco-based recipes that are too good to keep to yourself.

To make the syrup, simply combine blackberries, fresh chopped rosemary, sugar, and water in a small saucepan. Simmer roughly 20 minutes (uncovered), stirring occasionally until blackberry mixture thickens and reduces. Pour blackberry mixture into fine sieve over a glass jar or bowl, no need to press down on solids. After about 5 minutes, transfer syrup to fridge and let chill thoroughly. Once chilled, the syrup can be used as a base for your cocktail. Simply spoon it into your flutes, pour in the prosecco, and garnish with reserved whole blackberries and sprigs of rosemary.

The adults' table version of the party punch.

Combine first four ingredients in a pitcher and stir until well combined. Divide mixture among 8 glasses. Fill the rest of the glass with Prosecco. Garnish with fresh blueberry and lemon slices.

A spicy cocktail that looks sweet.

2 Star Anise, plus extra for garnish

In a small saucepan over moderate heat, combine ½ cup water, ½ cup sugar, 1 ½ cup pear nectar, star anise, cloves, and a cinnamon stick. Bring to a boil, then reduce the heat to low. Simmer for 10 minutes, until syrup thickens. Remove from heat and let steep for 20 minutes to let flavors infuse.

With a sieve, strain pear mixture into a container, and discard spices. Let cool to room temperature and refrigerate until chilled. Fill each glass with ¼ cup pear syrup, top off with prosecco, and add star anise for garnish.

Divide the sorbet between 2 champagne coupes. Top with the champagne. Float the raspberries on top.