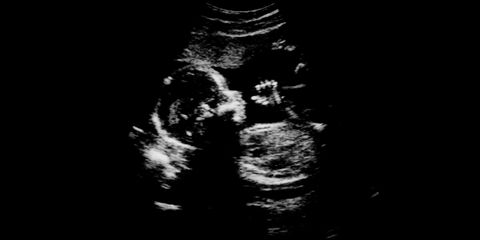 A fetus became Internet famous in July 2014. Redditor meancloth shared a scan of the not-quite baby. It was giving the world a thumbs-up. The web dubbed it "Fetus Fonzie." Within 24 hours, two million people had seen it.

"Ultrasound looks good," meancloth commented. And it did. At 18 weeks, the Fonz was as adorable as the contents of a gray-scaled amniotic sac can be. The Today show covered the story. So did Jezebel and People and the Daily Mail. Six months later, a writer for the conservative magazine The National Review, Howard Slugh, deemed the shot of "Fetus Fonzie" in utero "one of the most profound pro-life moments of 2014."

"When a matter is as hotly charged as the abortion debate, the mechanism for sharing a message can prove as important as the message itself," he wrote. "Ultrasounds, and other improving technologies, can help the pro-life movement persuade previously unreachable individuals."

Slugh wrote that as science and medicine advance, pro-choice advocates would have to face a new set of facts: "A mother looking at an ultrasound of her ten- or twelve-week-old child will know that this is no mere clump of cells, bit of tissue, or tumor." Instead, finer-tuned technology and clearer ultrasounds would force people to reevaluate "the entire abortion debate."

A week later, Ashley McGuire, a senior fellow at the Catholic Association, elaborated on the culture wars in USA Today. "[T]he pro-life movement is growing younger and stronger," she wrote. Because of the prevalence of prenatal scans on social media, young people know that fetuses are people. She celebrated the fact that in the first four years of the 2010s "more pro-life laws [have been] passed by state legislatures than in the entire previous decade." It is the mission of the movement to protect "the most innocent lives," McGuire wrote. "And we won't stop until we've won."

She titled her op-ed "The Ultrasound Generation."

It's a good headline, neatly expressing the anti-choice movement's conviction that millennials raised in a culture that celebrates and even fetishizes the prenatal picture have been hardwired to oppose abortion. And it's backed up by some research, which finds that liberal-leaning millennials tend to consider the moral valence of abortion more than traditional liberals once did.

Except most of the hard data is messier. Is it true that more millennials believe abortion should be outlawed compared to previous generations? If they do, how did social media influence them? And how many "likes" would it take to make, say, me a convert?

Is it true that more millennials believe abortion should be outlawed compared to previous generations?

Scottish physician Dr. Ian Donald started to develop the ultrasound in 1958, realizing it could help doctors locate and treat tumors. But he soon decided to try the machines out on expectant mothers. He reasoned that "the most common abdominal tumor in women is pregnancy," which is charming. With a peek into the shadowy womb, the scans could reveal once-obscured fetal anomalies, the size of the fetus, and the placement of its organs. By the 1980s, the ultrasound was standard obstetric practice.

Later in his career, Donald started printing photos from the ultrasound to give to patients. Women could have a medical procedure and take home a keepsake — two-for-one. By all accounts, Donald wanted both to reassure his most nervous patients and to facilitate a deeply felt prenatal bond. When he retired from medicine, he became a fierce anti-abortion activist. He produced a film, Human Development Before Birth, which screened on international television for at least a decade.

When the Supreme Court ruled in Roe v. Wade to legalize abortion in the United States in 1972, the anti-choice movement became even more convinced that the ultrasound could be marshaled in service of the movement. Johanna Schoen writes in her book on abortion in a post-Roe world that the dissemination of the ultrasound in the media was intended "to provide the public with a view of abortion from the perspective of the fetus." That is, the personal is political.

According to the most recent data, 55 percent of millennials think abortion should be legal in all or most cases. That statistic is consistent with a Pew report released in 2014 that concluded that 56 percent of Americans between the ages of 18 and 32believe in widespread abortion access. But those numbers do not deter McGuire. She points out to me that a full 59 percent of Gen Xers support legalization in all or most cases, which means that millennials are less pro-choice than previous generations. The dip may not seem substantial, but McGuire and so many others contend that it is just the start of a newly invigorated pro-life movement. Eighties and '90s babies were raised in an environment that normalized the prenatal picture, McGuire says. She reminds me that a scan "taped to the refrigerator door" is how many of us met our brothers and sisters. Raised on social media, millennials know what even one photo can do.

Raised on social media, millennials know what even one photo can do.

"This is the culture," McGuire observes. "It seems almost expected now that when you're pregnant, and as soon as you feel comfortable telling people, you put the ultrasound picture up, and people immediately respond." It's anecdotal, she concedes, but McGuire tells me that pregnancy announcements rack up more likes than any other type of status update on Facebook. "It's unifying," she says. "It's not like anyone is going to say, 'I'm pro-choice. I can't like this photo.'" For McGuire, that demonstrates a common cultural conviction. But research is more equivocal on whether a "positive response" online translates into an IRL stance on abortion. Does what we see on Facebook and Twitter predispose us to certain real-world values? Is it even possible to empathize on the web?

Science says: sort of. A 2015 study circulated in Computers in Human Behavior revealed that "virtual empathy was positively correlated with real-world empathy." That is, people can commiserate and celebrate and even really emote online. Empathy may be less potent on the web than it is in the real world, but it exists. It's possible that a person could feel for a fetus she saw on a computer screen. Social media has made abortion "a much more personal and much less political issue for millennials," says CNN commentator and conservative pundit S.E. Cupp. When a fetus shows up in our newsfeeds, chances are we know the person who shared it. Even before that child is born, he or she can exist in our world.                                                   *  *  *  *  *

Dr. Katrina Kimport, a faculty member at the University of California–San Francisco, specializes in making sense of women's individual and social experiences of abortion, and she has spent years researching the impact that prenatal scans have on women. According to her most recent work, about 42 percent of women who get an abortion in a state that gives them the option to view the ultrasound choose to do so. And, she continues, a woman under 25 is even more likely than an older woman to want to view her ultrasound. "So, these anti-choice activists are correct" that millennials have an increased interest in viewing, Kimport says.

But the statistics do not speak to what a woman who views the screen chooses to do about it. To grasp the effect that ultrasounds have on women, Kimport studied over 15,000 abortion visits over the course of one year. For the 85 percent of women who said they were "highly certain" abortion was the best decision for them, Kimport found that the choice to view the ultrasound had no impact on their plans to terminate. Even for a woman who was in what Kimport deems "a less certain space," the decision to see the sonogram only slightly increased the odds that she would continue with her pregnancy.

But the statistics do not speak to what a woman who views the screen chooses to do about it.

"So what does that tell us? That tells us that for people who are unsure, this may be part of how they make a decision," Kimport says. But Kimport adds that she thinks it would be a mistake to use that data to conclude that ultrasounds have the power to make women suddenly want children. The women who see an ultrasound and decide to carry pregnancies to term haven't recanted some previous conviction. They haven't changed their minds, even, because their minds were never made up to begin with.

When Kimport asked women who chose to view a prenatal scan how it made them feel, the results were even more revealing. "These were women at all gestational ages," she explains. "We're not just talking about women who were looking at a six-week embryonic sac. Some of these women were at the 22-week mark." Kimport and her team decided to let women write in responses, eschewing a traditional multiple-choice model. "Women had a really vast array of reactions," Kimport says. But the most common was not having one. After looking at the screen, most women reported feeling nothing at all.

"We know this from decades of research," Kimport continues. "Women make abortion decisions in relationship to the circumstances of their lives. And what you see on a screen is not going to change your financial situation. It's not going to change or reduce the needs of your existing children. It's not going to make a partner supportive or stop him from being abusive. The visualization on the screen doesn't change the reasons that make women seek abortions in the first place."

Advocates will tell you that ultrasounds are facts. They tell the truth — that fetuses are babies, that cells grow into people. Anti-abortion lawmakers want to keep it that way. Twenty-five states have passed bills that dictate how abortion providers administer ultrasounds. In Louisiana, Texas, and Wisconsin, laws insist that they not only give any woman seeking an abortion an ultrasound, but also describe it to her. In Oklahoma, a provider is required to tell his or her patient that personhood starts at conception.

The idea is that when a could-be mom sees a heartbeat flash across a screen, she will think better of her choices. This is no surreptitious aim. When the Fifth Circuit Court of Appeals ruled the Texas "verbal description" law to be constitutional, it did so based on a conviction that the procedure communicates only "truthful, accurate information." The fact that the practice "may cause a woman to choose not to abort her pregnancy only reinforces its relevance to an informed decision."

But an ultrasound is not incontrovertible truth, Kimport explains. The circumstances that drive a woman to seek an abortion dictate how she sees it, scrutinizes it, makes sense of it. That is, we find a thumbs-up when we search for one. "There is not an automatic way that a picture is going to make all women feel," Kimport says.

So, is this the ultrasound generation? That really depends on how you look at it.

Mattie Kahn is a writer at elle.com.