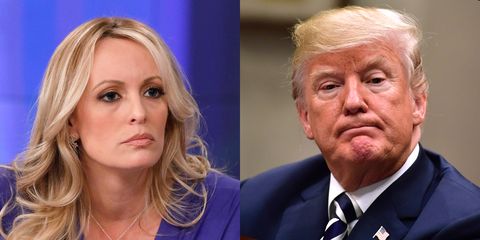 Stormy Daniels has planned the ultimate slap in the face for President Donald Trump and his lawyer Michael Cohen if she wins her lawsuit against them. Daniels said she will donate $130,000—the exact amount she was paid to keep quiet—to Planned Parenthood.

And the real kicker is, Daniels plans to donate the money in Trump and Cohen's name, she revealed during an interview with Penthouse Magazine. "I don't have shame. You can't bully me," she said.

In March, Daniels said she was revising her lawsuit to sue Cohen for defamation, specifically pointing to a statement he made earlier this year.

After a tape was leaked in 2016, Cohen reportedly paid Daniels $130,000 out of his own pocket, in exchange for her silence about her alleged year-long affair with the president. In January, Daniels decided she wanted out of the agreement she signed and sued Trump, claiming it was invalid because he never co-signed the documents.

Alex Warner
This content is created and maintained by a third party, and imported onto this page to help users provide their email addresses. You may be able to find more information about this and similar content at piano.io
Advertisement - Continue Reading Below
More From Politics
How to Demand Justice for Adam Toledo
Daunte Wright's Death Sparks Protest in Minnesota
Advertisement - Continue Reading Below
41 Surprising Rules First Ladies Have to Follow
Asian American Women on Where to Go From Here
Syrian Journalists Reflect on a Decade of War
How to Show Your Support for the AAPI Community
Activist Lydia X. Z. Brown on Disability Justice
Elisa Crespo: "I'm Not Here to Make History"
What We Know About the Georgia Spa Shootings
Dianne Morales Has Never Listened to the Naysayers