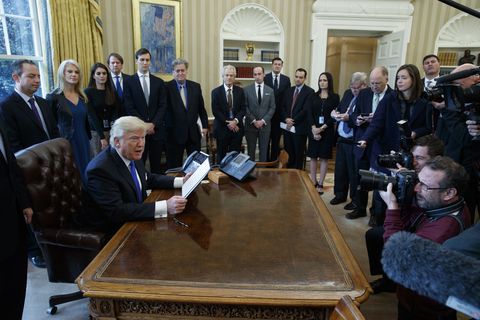 President Donald Trump moved to advance construction of the Keystone XL and Dakota Access oil pipelines Tuesday, a pair of projects that were blocked by the Obama administration due in part to environmental concerns. Both orders are subject to renegotiations of the agreements.

Trump also signed a notice requiring the materials for the pipelines to be constructed in the United States, though it was unclear how he planned to enforce the measure.

"From now we are going to start making pipelines in the United States," Trump said from the Oval Office.

Trump has sought to focus his first full week in office on jobs and the economy. Republicans, as well as some unions, have cited the pipeline projects as prime opportunities for job growth.

Former President Barack Obama stopped the proposed Keystone XL pipeline in late 2015, declaring it would have undercut U.S. efforts to clinch a global climate change deal that was a centerpiece of his environmental legacy. The pipeline would run from Canada to Nebraska where it would connect to existing lines running to U.S. refineries on the Gulf Coast. The U.S. government needs to approve the pipeline because it would cross the nation's northern border.

Separately, late last year, the Army Corps of Engineers declined to allow construction of the Dakota Access pipeline under Lake Oahe, saying alternative routes needed to be considered. The Standing Rock Sioux tribe and its supporters say the project threatens drinking water and Native American sites, though Energy Transfer Partners, the company that wants to build the pipeline, disputes that and says the pipeline will be safe.

Native American and other activists celebrate after learning an easement had been denied for the Dakota Access Pipeline on the edge of the Standing Rock Sioux Reservation in December.

The pipeline, which would carry North Dakota oil through South Dakota and Iowa to a shipping point in Illinois, sparked months of protests near Cannon Ball, North Dakota, where thousands of people opposed to the pipeline converged in a standoff with authorities.

After their initial victory in December, leaders of the Standing Rock Sioux tribe asked protesters to leave by February 19, according to The Wall Street Journal. But many are staying on with the idea that Trump might kick start the project despite the protests. And last week, the Journal noted, more protesters began showing up at the site ahead of Trump's inauguration. The president's executive order will likely spur on further demonstrations—and an influx of new demonstrators—at the site.