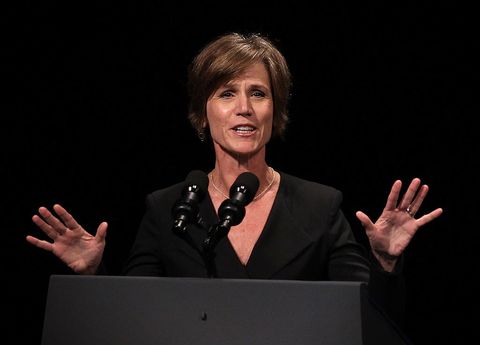 Update (1/30/17, 9:37 p.m.): In response to Sally Yates's statement refusing to defend the Muslim ban, President Trump fired her. She will be replaced by attorney for the Eastern District of Virginia Dana Boente.

The White House released a statement saying she's "betrayed the Department of Justice by refusing to enforce a legal order designed to protect the citizens of the United States."

And Sally Yates has been fired pic.twitter.com/Pbw0MxxNOt

The statement called Yates "weak on borders" and "very weak on illegal immigration," adding that "tougher vetting for individuals travelling from seven dangerous places is not extreme."

As The New York Times notes, the last time a situation like this occurred was in 1973, when Richard Nixon fired his attorney general and deputy attorney general "for refusing to dismiss the special prosecutor in the Watergate case."

In a letter to lawyers in the Justice Department released Monday night, Yates said it's her responsibility is to ensure "that the positions we take in court remain consistent with this institution's solemn obligation to to always seek justice and stand for what's right":

Former attorney general Eric Holder praised Yates after her declaration, saying that "her judgment should be trusted."

Sally Yates: person of integrity/attorney with great legal skill. Has served this nation with distinction. Her judgment should be trusted.

Trump also took to Twitter (naturally) in what seems to be a response to Yates's statement, claiming that Democrats "are delaying my cabinet picks for purely political reasons."

As The New York Times highlights, the statement was "largely symbolic" as the Senate will likely confirm Sessions soon, but it still "highlights the deep divide" within the U.S. government.

Jessica Pels Editor-in-Chief As the editor of Cosmopolitan, Jess oversees the editorial for all of Cosmo's efforts across print, digital, video, and emerging platforms.
This content is created and maintained by a third party, and imported onto this page to help users provide their email addresses. You may be able to find more information about this and similar content at piano.io
Advertisement - Continue Reading Below
More From Politics
How to Demand Justice for Adam Toledo
Daunte Wright's Death Sparks Protest in Minnesota
Advertisement - Continue Reading Below
41 Surprising Rules First Ladies Have to Follow
Asian American Women on Where to Go From Here
Syrian Journalists Reflect on a Decade of War
How to Show Your Support for the AAPI Community
Activist Lydia X. Z. Brown on Disability Justice
Elisa Crespo: "I'm Not Here to Make History"
What We Know About the Georgia Spa Shootings
Dianne Morales Has Never Listened to the Naysayers