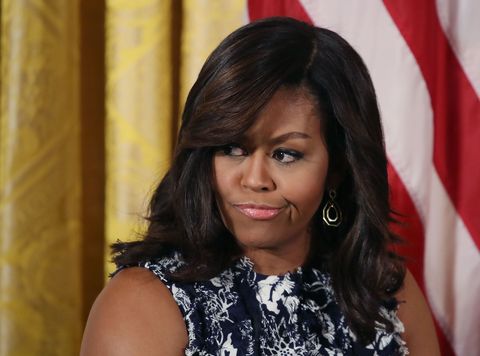 Michelle Obama might be out of the White House, but that doesn't mean she's done being a champion for the health of American kids. As first lady, she spent eight years working on her "Let's Move" initiative to combat childhood obesity.

Friday, at the Partnership for Healthier America Summit in Washington, D.C., Obama managed to expertly call out the decision without mentioning Perdue or Donald Trump by name, Mashable reports.

Michelle Obama fights changes to her healthy school lunches: "What is wrong with you?"https://t.co/RdVtq08nEZ pic.twitter.com/EdVtmKAmzS

"Stop and think," she said to parents at the event, "'Why don't you want our kids to have good food at school? What is wrong with you and why is that a partisan issue?'"

Perdue's plan would put control over whole grains, sodium, and types of milk used in lunches back at the local level, which would make enforcing nutritional standards more difficult.

"Moms, think about this. I don't care what state you live in, take me out of the equation, like me, don't like me, but think about why someone is OK with your kids eating crap," Obama said.

Kayleigh Roberts Kayleigh Roberts is the weekend editor at Marie Claire, covering celebrity and entertainment news, from actual royals like Kate Middleton and Meghan Markle to Hollywood royalty, like Katie Holmes and Chrissy Teigen.
This content is created and maintained by a third party, and imported onto this page to help users provide their email addresses. You may be able to find more information about this and similar content at piano.io
Advertisement - Continue Reading Below
More From Politics
A Valedictorian Speaks Out Against Abortion Bans
Standing Between Care and Violence
Advertisement - Continue Reading Below
Seeking Healing a Century After the Tulsa Massacre
What to Know about Texas's Abortion "Trigger Ban"
A New Book Invites Us to Rethink Menstrual Equity
We Must Remember George Floyd's Legacy
This Is How Much Joe Biden Is Worth
Joe Biden's Granddaughter Is His Biggest Fan
Watch Katie Porter Destroy a Big Pharma Exec
SCOTUS Will Hear a Major Abortion Case