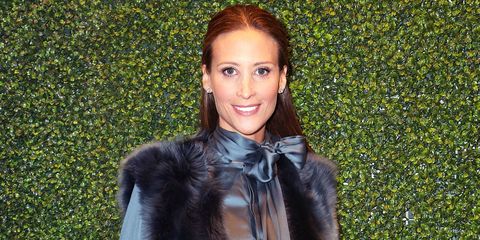 The world has spent weeks scrutinizing Donald Trump's cabinet and White House staff picks, but First Lady Melania Trump will have a staff of her own and former Vogue employee Stephanie Winston Wolkoff has officially signed on as the new FLOTUS' senior advisor, according to The Washington Post. (The New York Post called her Melania's chief strategist.)

Here's what you need to know about Winston Wolkoff.

1. Harry Winston is her legal grandfather.

Winston Wolkoff was raised in the Catskills by her mother, Barbara, and her biological father, photographer Barry Batinkoff. When Winston Wolkoff graduated from high school, her father broke the news of her parents' divorce and she reportedly lost touch with him soon after.

After the adoption, Winston Wolkoff rarely mentioned her biological father or Catskills upbringing, a choice that eventually led to some criticism.

Jay Lewin, the personal lawyer for Bruce's brother Ronald, told Page Six in 2010: "She's a Batinkoff—not a Winston. Stephanie is a Batinkoff of the successful Catskills chicken-farming family. She did not grow up on the Winston estate in Scarsdale."

Speaking to The New York Times, Winston Wolkoff said she hadn't intended to deceive people about her upbringing and that she doesn't describe Batinkoff as her father "because I've seen him twice in 20 years and because Bruce adopted me."

The couple met in 1996 and married in 2000 and have three children: Zachary, Tyler, and Alexi. David Wolkoff has made headlines for tearing down a landmark of graffiti art in Queens called 5 Pointz and turning it into luxury apartments. The couple was also sued by their son's former tutor, who alleged that they stiffed her on a $33,000 bill, according to the New York Post.

David Wolkoff Winston Wolkoff and her husband were both in attendance for Trump's NYC victory party on election night.

3. She's a Loyola alum and got her start at Sotheby's.

Her first job after college was as a receptionist at Sotheby's Auction House in New York, which she says served as her first exposure to event planning. She later worked as an assistant to concert promoter Ron Delsener before beginning her career at Vogue.

Winston Wolkoff joined Vogue in 1996 as a public relations manager. She worked in event planning, eventually taking charge of the high-profile Met Gala, which she described as "an incredible experience."

"She's everything you want to hate in a girl," her friend, Kim Gardner, told The New York Times for a story on her 2000 wedding. "She's tall, she's accomplished, she's athletic, she's thin, she's in, she's hip, she works at Vogue. But she's a sweetheart. You can't hate her. You have to love her.'"

During her time at the fashion magazine, one of her biggest fans was Editor-in-Chief Anna Wintour, who reportedly dubbed her "General Winston."

"She's immaculate," Wintour told The New York Times. "She makes everyone else feel like a complete mess."

Winston Wolkoff left Vogue in 2010 to spend more time with her family. She said she felt burned out after her years of work with the magazine. But her time out of the workplace was short-lived. Just a few months later, New York Fashion Week made the move from Bryant Park to Lincoln Center and Wintour helped Winston Wolkoff transition into a position as its fashion director.

After two and a half years as the fashion director at Lincoln Center, Winston Wolkoff left to start her own agency, SWW Creative, which coordinates relationships between businesses and people in the fashion, beauty, and entertainment industries. Her clients included IMG Fashion Worldwide, Council of Fashion Designers of America, and Lincoln Center for the Performing Arts.

7. She's been close friends with Melania Trump for years.

Those who have followed Melania Trump's time in the public eye won't be particularly surprised by Winston Wolkoff's appointment. The event planner and First Lady have known each other for nearly 20 years.

"Don't underestimate her just because she is quiet and reserved. There is virtue in the fact that she appears to be quiet and isn't on the front lines constantly saying, 'Hear me, see me.' But she's very confident in her viewpoint."

Melania even tweeted Winston Wolkoff some happy birthday love in 2013.

8. She helped plan the Trump inauguration.

Before her appointment to Melania Trump's staff, Winston Wolkoff was involved with the Trump administration in another capacity: as part of the team organizing the inauguration. She reportedly acted as an advisor to Tom Barrack, the head of Trump's inaugural committee.

9. She'll have real responsibilities working for the First Lady.

Kayleigh Roberts Kayleigh Roberts is the weekend editor at Marie Claire, covering celebrity and entertainment news, from actual royals like Kate Middleton and Meghan Markle to Hollywood royalty, like Katie Holmes and Chrissy Teigen.
This content is created and maintained by a third party, and imported onto this page to help users provide their email addresses. You may be able to find more information about this and similar content at piano.io
Advertisement - Continue Reading Below
More From Politics
How to Demand Justice for Adam Toledo
Daunte Wright's Death Sparks Protest in Minnesota
Advertisement - Continue Reading Below
41 Surprising Rules First Ladies Have to Follow
Asian American Women on Where to Go From Here
Syrian Journalists Reflect on a Decade of War
How to Show Your Support for the AAPI Community
Activist Lydia X. Z. Brown on Disability Justice
Elisa Crespo: "I'm Not Here to Make History"
What We Know About the Georgia Spa Shootings
Dianne Morales Has Never Listened to the Naysayers