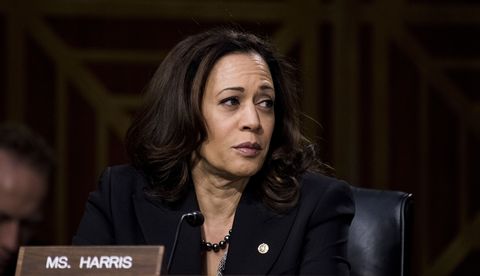 Senator Kamala Harris recently joined members of the Senate Intelligence Committee to chat about whether Donald Trump tried to obstruct the investigation into collusion between his campaign and Russia (sigh, what is life), and was cut-off mid-sentence and told to be "courteous" while questioning Deputy Attorney General Rod Rosenstein . Which, 😐.

"The chair is going to exercise the right to allow the witnesses to answer the question," committee chairman Richard Burr said after cutting Harris off. "The committee is on notice to provide the witnesses the courtesy, which has not been extended all the way across, for questions to get answered."

Here's what she had to say after the fact:

The American people deserve to know whether the special counsel is fully independent. We need the truth. I won't stop until we get it. https://t.co/RVjDXP4U4g

Mehera Bonner Contributor Mehera Bonner is a news writer who focuses on celebrities and royals—follow her on Instagram.
Advertisement - Continue Reading Below
More From Politics
How a Parkland Mom Turned Her Grief into Action
He Voted for Trump. She Voted for Bernie.
Advertisement - Continue Reading Below
How Guerrilla Feminists Are Fighting Femicide
Who Was Mayor Pete's Father, Joseph Buttigieg?
Everything We Know About Senator Warren's Husband
Mayor Pete's Husband Would Be a "First Gentleman"
Nancy Pelosi, Icon, Ripped Up Trump's SOTU Address
Thoughts From a First-Time Caucus-Goer
And Now, a Word From the Future Voters of Iowa
Ayanna Pressley Wants Total Justice for Survivors