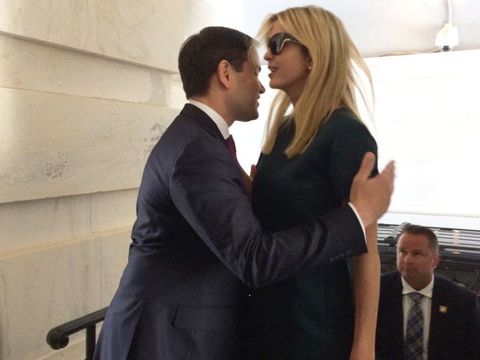 Once upon a time, Ivanka Trump and Marco Rubio found themselves in the same room, and were forced to hug. Actually, make that "hug." The pair partook in what is best described as a partial body slam, in which Rubio's attempt to hug the First Daughter was met with a solid "nope."

The hug fail obviously went viral, and—in an attempt to be "cool" and "funny" and "in on it"—Rubio and Ivanka hit Twitter.

Based on review of evidence & my own recollection, have concluded no hug was even attempted & press covfefe of alleged failed hug is false

Anonymous sources say @marcorubio planned the alleged failed hug. I have no comment (but I would have hugged him anyway! 🤗) https://t.co/TChrqWsL4D

Not so shockingly, the rest of Twitter (like Chrissy) was not here for Ivanka and Marco's attempt at humor.

Multiple sources say you're both terrible people and you should stop fucking up our country.

Is this really what you are tweeting about when millions of Americans might just end up with no healthcare at all? pic.twitter.com/DzuAcNyk9g

Lesson learned? Never try to be funny on Twitter.

Mehera Bonner Contributor Mehera Bonner is a news writer who focuses on celebrities and royals—follow her on Instagram.
Advertisement - Continue Reading Below
More From Politics
Ayanna Pressley Wants Total Justice for Survivors
Jot Down These 2020 Voter Registration Deadlines
Advertisement - Continue Reading Below
What the ACLU Will Fight For in the Next 100 Years
Behind the Controversy at the Women's March
Women Are Not Granted Equality in the Constitution
Electability Is About Us—Not the Candidate
Everybody Running for President In 2020
Time’s Up for Wall Street
Women of Color Ruled Last Night's Debate
Cory Booker, Rosario Dawson Are Traveling Together