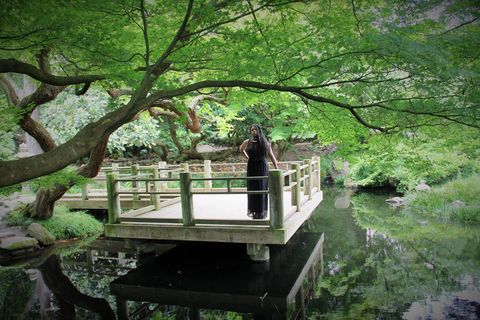 Courtesy of the author

Ever since I was a little girl, I thrived in groups. I grew up in a house with two older brothers and had a wide circle of friends. We were always all together, celebrating life milestones like losing our virginity or coming out as gay or queer before we told our parents. I learned how to share my emotions and express empathy for a number of people. I was responsible for always remembering family members' birthdays and loved buying gifts for people, even if they didn't know me well. I didn't realize how well this would serve me until I faced a difficult decision as an adult.

I didn't come out as poly until I was 29 years old. Despite my ability to balance relationships and have honest conversations with my partners, I held on to the idea of staying in traditional monogamous relationships until an ex of mine gave me a book to read and asked me to consider having a polyamorous relationship with him. The relationship didn't work out, but the seed was planted. Eventually I got married to a man who was open to an open relationship too, and I was free to tell certain friends and family. At the moment, I have one partner—besides my husband—who I am very close to. He has a three year old son, who I help take care of. We pretty much behave like a "traditional" relationship, meaning my partner and I have decided not to see others outside of our current arrangement at this time. If we go out, I can tell him that I danced with another guy and had a good time. He can tell me he saw an ex and had a nice conversation with them. In a poly relationship, it doesn't always mean having more than two or three partners, it can also involve communication and having a "protocol" set up if you want to go on a date or sleep with someone else. That protocol is honesty and the ability to listen to one another.

Another wonderful thing about being poly is that I have a stronger support system. My husband is very kind, and as a married couple, we work hard to manage our marriage. He and I both work often and in different fields, so it's a bit harder for him to be present, and that's ok. Instead of feeling resentful, I'm able to maintain a positive relationship with him because my partner is more present and works his own hours. Plus he has a wonderful child I enjoy spending time with. All of this means I have lots of help when times get complicated in my life.

When I turned 30, my doctor felt a bit of firmness in my lower abdomen. I was on a routine physical, and she mentioned I might have fibroids and told me to schedule a follow up appointment to check for them. Fibroids are benign tissue growths that grow in and around the uterus. Fibroids are very common in African American women. My mother had them, so did my grandmother.

After a follow up appointment, I was told my fibroids were severe, and that even if I had them removed, it would be difficult for me to have a child. This is because they were rapidly damaging my uterus, causing it to become enlarged more than three times its size. They were incredibly uncomfortable. I urinated frequently throughout the night, and bled lightly between periods. The pressure of my uterus being so large made it painful to bend down or sit for long periods of time.

Currently, there are a number of ways to treat fibroids, but sometimes they can still return after treatment. My doctor gave me a couple of options, but because my case was very severe, I wanted a hysterectomy—I knew it was the most permanent treatment option. I wanted a healthy body.

The first person I called was my mother. She quickly answered the phone and I told her the diagnosis and that I was leaning towards the hysterectomy. Although my mother had fibroids and a hysterectomy herself, it was after she had three children. Even though we could relate, it was hard for her to hear that I might never have children. It is a mother's job to make sure her children think clearly and weigh their options when it comes to reproductive health, but I needed someone to really hear my decision.

Later that day and several times after that day, I spoke to my partner, who has been very supportive. He is a father, and isn't looking to have more children immediately. He did believe that freezing my eggs would be a good option in case we wanted to have children in the future, but my health and my decision were fully supported. I also work as a teacher and an activist for family inclusiveness in the arts, helping creative mothers find work. I've been able to find my niche in the world of parenting, even though I didn't have children of my own. I'm an experienced nanny and child caregiver and feel pretty fulfilled maternally. If I were in a monogamous relationship, I might have felt more trapped in this decision, thinking about only my husband's view on future children. Thankfully, like my partner, my husband also wasn't looking to have children at this time. But in a poly partnership, my husband and I know we both have more avenues to fulfill parental needs.

My partner understands this and appreciates the support I give while he's managing as a single father, so he was very kind. He's going to be my caregiver when I get out of the hospital as well. My husband has of course been kind and supportive too, but because he works and needs to maintain a schedule, he's less available. Being poly, I've been able to make my choice of who I feel most comfortable with helping me through my surgery and recovery.

I believe a monogamous relationship would have made things more frantic: I would have struggled balancing my husband's schedule, and potentially would have had to ask my mother to get on a plane to help me recover. I don't drive, so at some point, days after the surgery they'd have to get back to their lives and I'd be left immobile, trying to take Ubers, shopping for myself and doing things that could slow the healing process. Polyandry for me is just as much about practicality and finding ways to live comfortably just as much as it is about sex and emotions. As I get older, I'm realizing, I can't do everything on my own like I did in my teens and twenties. I'm learning it's time that I lean more on my family.

A monogamous relationships would have made things more frantic.

When it comes to being poly, you hear a lot about sex, but being poly is much more about choosing the right partners and communicating. I have good people in my life; I'm very thankful for my mother and my friends. Being nonhierarchical poly—where no one partner is more important—allows me to communicate and bond with them all equally without judgement and jealousy over me, because I work to give my time and support to them. Not everyone in my life needs to be around me 24/7. It doesn't mean they love me less, or vice versa.

With monogamy you hear couples say, "It's us against the world", but I personally don't believe life was made for just two people to take on. Traditional marriage and monogamous relationships tend to put a barrier between married couples and intimate friends and close family. Couples are expected to share their most tender moments only with husbands or wives and any search for emotional, spiritual or sexual intimacy outside of the marriage is seen as a betrayal.

Being poly doesn't solely mean allowing your partner to have sexual choices, it more means giving your partner openness in all aspects of a relationship. I've recently scheduled my hysterectomy surgery, and even though I am a little afraid, I know I'm going to be ok.