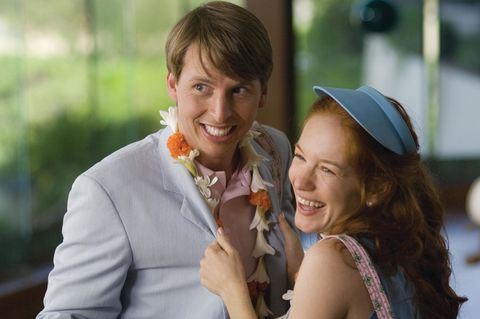 In less than nine months, I'll be a newlywed. And because major milestones, like marriage, can cause people (okay, me) to get a little cray-cray with the social media, I asked my friends and fellow Cosmopolitan.com writers for their input on some of the most egregious acts married people commit on Facebook. As you'll see below, they had plenty to vent about — so, here's to hoping I can contain myself.

1. Re-posting their wedding photos on every anniversary

When you're newly-married, sharing wedding photos is unavoidable. You can't resist, all of your friends are still excited for you. Fine. But you don't need to change your profile photo to you as a bride... Every. Single. Year. As one of my colleagues put it: "If it's your 10th or 20th anniversary, fine. But doing this for some random middle year just means you want everyone to see how good you looked in your dress."

Do not countdown the days to some insignificant anniversary ("OMG, 2 days 'til 1 month married! We did it!") Or share every step of getting your first house. ("Escrow is SOOOOO stressful — comfort food time!") No one cares. Also, you suck for complaining-bragging about the fact that you can actually afford a house.

3. Posting too many photos of their spouse

When you're always together, it's natural to snap pictures of your partner-in-life (and less annoying than putting up selfie after selfie… after selfie.) But, like all things in life, there is a line. As in, don't be like this friend's friend: "For #tbt last week my friend's hubby posted a pic of her from 2010 and she posted a pic of him from 2010… shirtless." That's just awkward. (Also, 2010 is not a "throwback" not matter how much better you man's abs looked back then.)

4. Tacking on infuriating hashtags to your status updates to show everyone how amazing your life/spouse/marriage is

"When my friend's wife cooks — which might be every night? — she posts pictures of lame-looking food and is like #bestwife," reports a pal. (Guh.) Can everyone just agree to never use #luckygirl, #lovemyhubby, #arentwecute, #themoonofmylife, et al? Honestly, when you post those kinds of things, people just assume you're sublimely unhappy and need to (tragically) use hashtags to overcompensate. #sorrynotsorry

5. Constantly gushing over each other

There's a big differnce between being supportive and continually reminding the interwebz that you married your "best friend." While it's great that your spouse is an awesome dude, a great dad, a fab cook, and so on… maybe you should tell him that — like, in person — rather than make a group announcement. As one of my friends put it: We get it. You love each other. You should.You're married.

6. Deciding on date night, weekend, and other plans via wall-post

Have you not heard of text messages? Or talking face-to-face? Or, gasp, Facebook messages?

7. Fighting, then making up, via wall-post

No one needs to see your passive-aggressive digs about how "somebody" never appreciates you. Especially me.

8. Always using "we" rather than "I" in their status updates

Trust me, I get it. More often than not, when I tell stories nowadays, I say "we did xyz" or "we feel such and such way" rather than using the first-person singular. And my own behavior annoys the s*** out of me.

9. Full-on sharing an account with both of their names on it

Not trying to be a judgmental meanie, but I'm suspect of shared accounts, whether it be email or social media — either y'all don't trust each other (and need to have full access to each other's correspondence) or you've ceased to maintain your autonomy. Or, you're grandparents.

Sure, it might not be annoying per se — unless you're constantly sharing asinine "inspirational" quote posts like this one and encouraging constant eye-roll among your friends — but is "liking" these kinds of pages really necessary? (Again, see #5)