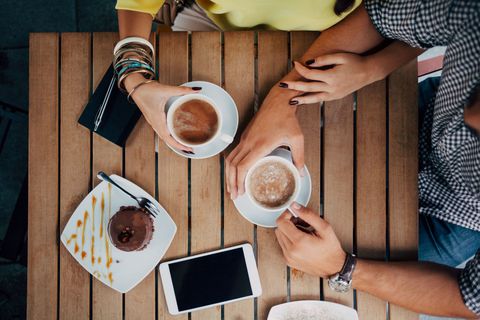 Dating has a high emotional cost. Making eye contact, flirting, exchanging early text messages, choosing a bar, trying to make conversation, trying to suss if you like this person, trying to suss whether this person might try to maim you spiritually or literally—it really takes a toll on a person. According to a new Match.com survey, dating hits your wallet pretty hard, too.

In their annual Singles in America report, for which they surveyed thousands of single people around the country, the site learned that the average single person spends $1,596 a year on their dating lives. For that much money, you could easily take yourself on a very romantic solo trip to Paris, FYI.

The top-spending city was San Antonio, TX, with an average of $2,537 spent. That's almost $50 a week. The other cities in the top five were Atlanta, Baltimore, Nashville, and New York.

The survey is packed with other interesting dating stats, such as the best locations for flirting (in terms of what spots are most likely to translate to a date). Sixty-four percent said a bar, followed by the laundromat and the gym.