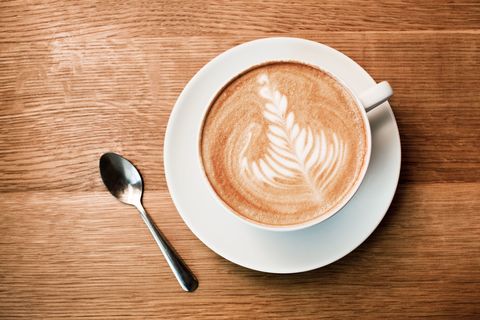 Coffee may protect you from more than an afternoon slump — if you drink enough of it. A massive new study suggests that drinking lots of coffee could reduce your risk of developing cancerous melanoma.

In the 10.5-year effort, researchers analyzed the food frequency questionnaires and health records of nearly 450,000 people involved in a National Institutes of Health (NIH)-AARP Study. By the end of the study, 2,904 people developed malignant melanoma, a serious type of skin cancer that occurs in cells that produce pigmentation, and 1,874 people developed abnormal skin cells that could lead to cancer (AKA "melanoma in situ").

rays), researchers found some interesting associations: People who drank four or more cups of coffee per day were 20 percent less likely than non-drinkers to develop malignant melanoma, and people who chose caffeinated coffee in particular were even less likely to develop it. Coffee didn't seem to reduce the risk of melanoma in situ, probably because it progresses differently than malignant melanoma, according to the study authors.

So how does coffee do such awesome things for your skin? The study authors think it contains some super-special compounds (including caffeine) that, at least according to studies conducted in laboratories and on animals, appear to fend off cancer in a few different ways: They suppress cells that turn cancerous in the sun, reduce inflammation, fend off oxidative stress and DNA damage, absorb harmful sun rays (kind of like sunscreen), and detoxify carcinogens — all wonderful news for people with shamefully high Starbucks bills and a constant coffee buzz.

The 8 Worst Things You Can Do to Your Skin

What's THAT Like? 10 Celebrities with the World's Most Perfect Skin

Elizabeth Narins Senior fitness and health editor Elizabeth Narins is a Brooklyn, NY-based writer and a former senior editor at Cosmopolitan.com, where she wrote about fitness, health, and more.
Advertisement - Continue Reading Below
More From Beauty
Hailey Bieber's Beauty Routine Is So Simple
Facts to Know Before You Get a Keratin Treatment
Advertisement - Continue Reading Below
The 3 Lipsticks I Have In Rotation Right Now
Why Using a Product With Peptides Is Worth It
Created for From Marie Claire for Created by Marie Claire for
StriVectin Peptight
Line Edit: Eyeliner Trends That Are High Drama
Black-Owned Beauty Brands You Need to Know
The Body Lotion Your Dry Skin Has Been Craving
Know the Signs That Your Makeup Has Expired
Kendall Jenner Has Rapunzel Hair On 'Garage' Cover
WORTH IT: Royal Fern Skin Perfecting Essence