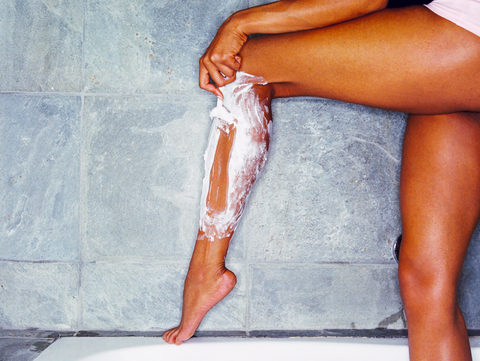 We live in a world that tells women that to be desirable is to be hairless and smooth. To be pretty and attractive is to have to go to extensive lengths to shave, wax, laser, bleach, and remove your body hair. Those of us who buck these beauty standards can sometimes deal with real judgment for making that choice.

I stopped shaving my legs because I got lazy. It was as simple as that. Not to mention that, no matter what kind of razor or shaving cream I use, shaving irritates the shit out of my legs. My hair started growing in, and I just didn't do anything about it, until it had grown in completely. And to be honest, I hated the way it looked. It's dark and wiry and noticeable. I had internalized the message that a woman with leg hair is unattractive. But it was more comfortable for me, and I wore pants all winter, and so the leg hair stayed.

Cut to the next summer and I still had hair on my legs. I did not want to shave it. I still had trouble not seeing it as ugly, and no matter how long the leg hair remained, I didn't find myself getting used to the way it looked. I had internalized these arbitrary, patriarchal beauty standards. And even though, objectively, I knew that's all they are—products of misogynistic messaging, they were hard for me to shake. So hard, in fact, that despite the 90-plus degree weather, I avoided wearing short dresses or skirts in public for fear of what people might think.

It's incredible to think about the fact that, in 2015, it's still a radical statement for a woman to go out in public sporting body hair. It's radical to do anything to "minimize" my attractiveness to men in a society that tells me that that's where my worth comes from. Whether I like it or not, walking outside my house in a short skirt with hairy legs is terrifying.

But you know what I realized? That that's messed up. I realized that by being afraid to walk out of the house looking like me, by worrying about other people judging me or finding me gross, I was letting the patriarchy win. I realized I have agency over my own body, and if I want to have hair on my legs, I get to have hair on my legs. And I also realized sex appeal and leg hair are not mutually exclusive. I can be attractive and have leg hair. I also realized I don't owe it to anyone to be beautiful. Who says I have to be? Who says I should be? Maybe I don't want to be beautiful. How's that for a radical statement? Maybe I don't want to be beautiful. Especially if being "beautiful" means I have to change my body and appearance based on standards set by someone else, standards that don't feel true to who I really am.

And so I put on my short dress and I walked out of my house. I reclaimed my body for myself. Nobody said a thing, but if they had? That's their problem.

This content is created and maintained by a third party, and imported onto this page to help users provide their email addresses. You may be able to find more information about this and similar content at piano.io
Advertisement - Continue Reading Below
More From Beauty
There's a BB Cream for Every Single Skin Type
Consider This a Sign to Get a Lob This Summer
Advertisement - Continue Reading Below
Foot Peels Are Your Satisfying Secret to Soft Feet
Bronzers That Leave Your Skin Sun-Kissed & Glowing
The Dry Shampoos You Can Count On
Should You Be Using a "Natural" Toothpaste?
Black-Owned Beauty Brands You Need to Know
Charlotte Cho Swears By This $22 Liquid Liner
First Look: Olivia Palermo Beauty
Long Hairstyles for Every Shade and Texture