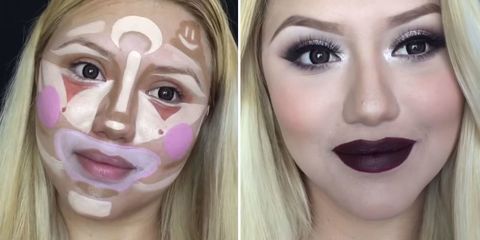 A clown isn't who you'd think of first when you think makeup guru, but there might actually be something there.

YouTuber BellaDeLune has developed on a new way to "extreme color-correct, highlight, and contour"—that is, to look as sculpted as Kim Kardashian—and the method is called "clown contouring." In her video tutorial called "Clown Color Correct Highlight & Contour," the guru (real name is Esther Isabel Amado Romo) shows how dramatic clown-style makeup can be blended into a flawless face.

"Personally, I cannot tell you how many times I have been called a clown and many other names, and been hated on, because of the way that I use this art form," she says in her video tutorial. "I just did this to show you what a real payasa looks like," using the Spanish word for clown.

Another makeup guru Makeup By Alo shows how she achieves the same look with contours that resemble a sugar skull.

I seriously can't tell which is more amazing, the before look or the after. Check out the full video below for more on clown contouring.

Advertisement - Continue Reading Below
More From Beauty
Hailey Bieber's Beauty Routine Is So Simple
Facts to Know Before You Get a Keratin Treatment
Advertisement - Continue Reading Below
The 3 Lipsticks I Have In Rotation Right Now
Why Using a Product With Peptides Is Worth It
Created for From Marie Claire for Created by Marie Claire for
StriVectin Peptight
Line Edit: Eyeliner Trends That Are High Drama
Black-Owned Beauty Brands You Need to Know
The Body Lotion Your Dry Skin Has Been Craving
Know the Signs That Your Makeup Has Expired
Kendall Jenner Has Rapunzel Hair On 'Garage' Cover
WORTH IT: Royal Fern Skin Perfecting Essence