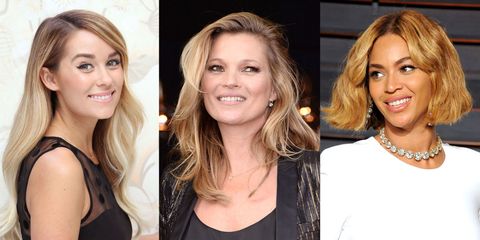 There are beauty disasters you can recover from and those you're better off moving to deep Montana to wait out. Guess which category this falls under?

If you were thinking like any of the people on this list, you would have approached that singed-off section of hair like, "Oh, whatever. Guess I'll trim the other side to match and slick them onto my face like a Balenciaga model." Then you would have landed an i-D cover just like FKA Twigs.

Here, we bring to your attention five beauty moments that could have been catastrophes were it not for these celebrities' laissez-fair attitudes, ingenuity, and willingness to start something new. Now, doesn't that put your smudged mascara into perspective?

So apparently it doesn't wash out... Looks like I'm sporting pink locks for the rest of this trip.

When life throws pink powder into your hair, pretend it's on purpose and keep it. After all, you did try it before—but just on the ends—in 2012.

I don't know whom I'm more impressed with: Beyoncé for reacting like she meant to get caught in a fan (THIS IS ABOUT THE SISYPHEAN STRUGGLE OF LIFE, ISN'T IT?) or the security guard who had the audacity to snip her free. Golf claps.

Were those roots? Dyed streaks? A dry shampoo hit-and-run? (Always apply your Klorane like this, people.) In any case, "fashion gray" took off as a desirable hair color, so much so, that 1) the New York Times did a trend piece on it, and 2) We're still talking about it five years later.

In the history of tanning, there's B.C.C. and A.C.C.: before Coco Chanel and After Coco Chanel. Legend has it that, while she was cavorting on the French Riviera in the 1920s, she inadvertently got a sunburn. When she returned to Paris, her inarguable chicness compelled fashion to embrace bronzed skin, overturning centuries of anti-tan sentiment. It helped that hers was a result of yachts and leisure instead of hard labor under the sun.

Don't you love trivia like this? In an interview with Social Stereotype, Pepa revealed her signature asymmetrical cut—the one that reportedly inspired Rihanna's and so many other women's—actually came about because of a botched hair treatment: "My sister was perming my hair one day, and she kind of burnt me on one side of my head. She tried to fix it by giving me a back cut but just made it worse and worse on one side, so I was like, 'just cut it off!'" Someone add this to the next accidental inventions book.

You Have to Cut Your Hair to Grow It Out, and 8 Other Beauty Ironies

Every Hair Problem You've Ever Had–Solved