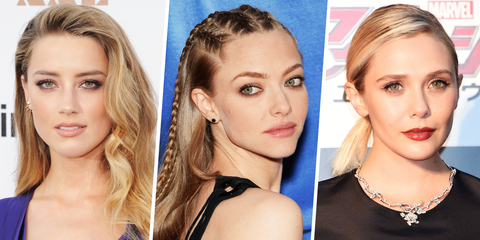 When we wake up in the morning, we have to muster every bit of willpower just to throw our next-day hair in a messy bun, which is why we look to celebrities to inspire us out of this dangerous pattern. Here, find every star giving us hair envy, whether they've simply reinvented bedhead or are blowing our minds with a never-before-seen style.

Slightly undone is the new chic. Heard makes a case for her signature side-parted swoop and messy waves on the red carpet. To achieve the '70s-inspired look yourself, simply wrap chunky pieces around a curling iron, then fluff out with a boar bristle brush.

Hadid nails the ideal waves-to-frizz ratio with her slightly messy, tousled mane at the beach, where your hair either works with the humidity and texturizing salt water, or pays a dear price.

Getty Images
3 of 31
Elizabeth Olsen at the Avengers: Age of Ultron Premiere

Olsen adds some edgy, Japanese-inspired flair to her knotted updo by leaving a few pin-straight inches hanging out to the side. It's cool-girl elegance at its finest.

Lovatos goes ultra-modern by slicking back her lob straight back. The wet-slick look isn't just chic, it also keeps frizz at bay, which is why gel is an absolute must this summer.

Eat you heart out, Khaleesi! The Game of Thrones protagonist has nothing on Seyfried's super-sized, cascading plaits. We love how she lets her down in the back, but knots it at the bottom.

6 of 31
Cara Delevingne at a Paper Towns Photo Call

Here, Delevingne makes a case for tried-and-true braid waves. Simply tie your wet or dry hair into pigtail plates, keep them in for a few hours, and watch the magic happen.

7 of 31
Kiernan Shipka at the Los Angeles Film Festiva

Tying your hair back is practically a given during the dog days of summer, accent the raked-back 'do by pulling out a few pieces of baby hair on one side for a youthful, yet edgy look.

With a sleek center part, Moretz pulls the front pieces of her hair back into twists and pins them for a neat, yet beachy 'do.

9 of 31
Jennifer Lopez on the Shades of Blue Set

On the set of her new TV show Shades of Blue, Lopez lets her curls run wild with her newly-minted crop cut. Thus, inspiring us to embrace the humidity this summer.

Delevingne throws her hair up in a high ponytail and finishes the look with a knotted bandana, which is a total cool-girl touch.

On the big night, Hadid smooths her long, ombré mane back into a braided ponytail, then coils it into a neat bun for a look equal parts modern and classic.

Kruger shows of her undone beach waves, whilst protecting her hair from the scorching heat, by wearing a classic straw boater hat. It's the chicest of lifesavers.

Jenner shows off a messy bun with loose strands that fall in the face—a new trend, if Doutzen Kroes' previous look is any indication.

Delevingne shows off us some gorgeous mermaid-esque waves with chunky pieces curled at the middle, but stick-straight at the bottom.

If you'll be paying a visit to your colorist in the near future, consider hair-contouring highlights like Kloss', which will define your facial features in sun-kissed fashion.

Kroes adds some edge to the notoriously-easy half-up, half-down look by parting her hair at the center, then teasing the front sections up and setting the look with wet-shine spray.

Azalea's newly-pink tips are a perfect complement to the soft, mermaid-wave texture of her bleach-blonde lob.

XCX proves that rough-dried hair can be totally chic with a side-part and dark, rumpled waves.

The model slicks back her stick-straight hair using gel for a wet-shine finish. Learn how to recreate the sought-after look with ease here.

Mara is now a proud member of the half-bun club. She sports the style by keeping her middle part on display with wisps of hair sticking out of her tiny top knot.

Miller's 'do is totally humidity-proof thanks to the two, neat French braids in this bohemian-elegant look.

Stone pulls back her auburn hair into a loose updo with piece-y waves in the front that allow her chic ear cuffs to peek out.

Kroes makes a case for brushed-back bedhead with her hair tied back in a messy bun and loose pieces of hair framing her face.

Solange looks radiant as she embraces her natural texture with her gorgeous, voluminous afro.

An ultra-high top knot has never looked so effortless. Jones shows us that brushed back with a slight tease is the way to go.

Teigen adds some oomph to her beachy side braid with a retro-inspired S-wave in the front.

Forget that it was totally unplanned—Bey's ultra-high, Croydon-like ponytail has single-handedly revived the '80s style. Not to mention, she even rocked the look the next day.

28 of 31
Anne V at the White House Correspondents' Dinner

The supermodel shows off the ultimate beach babe bun with her blonde hair artfully topped upon her hair and soft pieces in the front.

Swift adds a dash of retro to her dark blonde bob by parting it to the side with a subtle, '20s-inspired wave.

Gomez spices up her newly-chopped, raven-black lob with the neatest of beach waves. You can achieve the same look by using a one-inch curling iron on second day hair.

Next
How to Recreate 5 Cult-Favorite/Impossible-to-Find Lipsticks 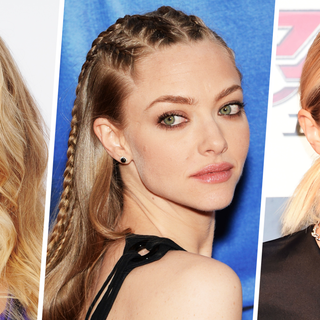