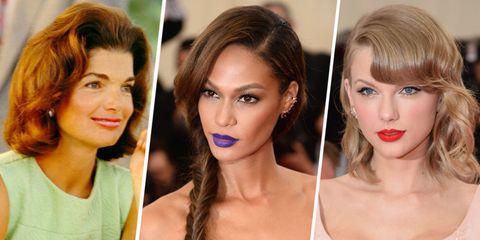 If you've been anywhere near our Instagram in the past 24 hours, you'll know we've been nonstop celebrating National Lipstick Day, the most Marie Claire holiday after Equal Pay and National Pizza Days. In honor of the festivities, we've put together enough exemplary lip colors to inspire you for a whole *month.* Because honestly,#toomanyshadestoolittletime.

The lipstick she applies at the end of Breakfast at Tiffany's might have been nude-pink, but that quote from the same movie ("A girl can't read that sort of thing without her lipstick") and the pillar box red pictured here never fail to get us to 1) dab some on before we leave and 2) imagine what it's like being a real Lady.

D'you know why Marilyn's lips are so big? Because they're full of secret contouring magic.

Red lipstick to Madonna = the makeup equivalent of her cone bra.

Baby Gwen Stefani! With a rockabilly version of the multi-shade red lip we saw on Marilyn before.

And here, we've got the '90s brown lip. With the abbreviated bangs, flowers, and Drew's sunny personality, it looks not-sneery for once.

Emma killed it in the wardrobe and beauty departments on her Spider-Man promo tour, but this avant-garde look was like the gateway drug to deeper purples and reds that later became so cult-y you couldn't buy them anymore.

To quote, um, me, as I wound up to explain how to mix your own version of this sold-out shade: "One time, Rihanna collaborated with MAC on a cool red with a matte finish, and lipstick was never the same again."

Here, at the Great Gatsby premiere, Cara D. brings it. Even before she had starred in Paper Towns, this is the moment we knew she was a movie star. (The jewels don't hurt.)

That makes three instances of the Marilyn Mouth, though we're not complaining at all about her two-tone version.

We need more orange on the red carpet, don't you think?

So it turns out Kylie's pillowy lips didn't get to be that way solely from some light-bending lip liner application, but she did manage to cause a lip liner shortage when girls looking to recreate her updated '90s nude over-ordered MAC Spice.

Lupittaaaaaa. She has so much fun with her hair and makeup, but this jewel-like fuchsia—with that coordinating eye—stands out as one of her best.

I've got a theory that, once Taylor Swift made red lipstick her Beauty Thing, scores of girls across America did the same thing. If someone funds me, I'll do a study.

Same thing re: Mossy, except hers was probably applied mirror- and brush-less in the back of a car on the way to a fabulous private club.

This is how Beyoncé does film noir. As with everything else she does, this merlot went over rather well.

One year later, and we're still fascinated by this purple-blue-y unicorn.

Next
Every Facial and Why You Need It 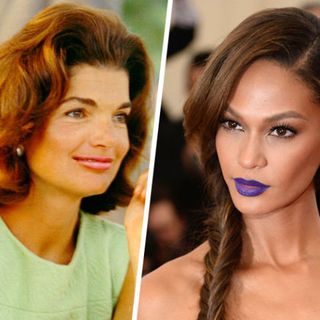