God bless Andy Cohen and the Watch What Happens Live after show, because where else would we get our celebrity tea? The Bravo legend is known for asking his guests questions that no one else dares to, and most recently quizzed Kate Hudson about rumors that she used to date Brad Pitt. The answer? Nah.

Related Story
Celebrity Love Triangles to Sink Your Teeth Into

"That was the craziest rumor of all time. No, there's nothing true to that,'" she told Andy Cohen. "As a matter of fact I hadn't actually seen him in, like, four years."

That said, "It was kind of an awesome rumor. I kind of liked it. I was like, 'Okay, fine. We’re having twins!'"

Welp, that settles that. 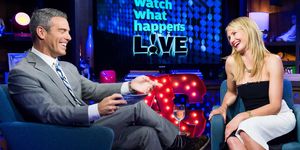