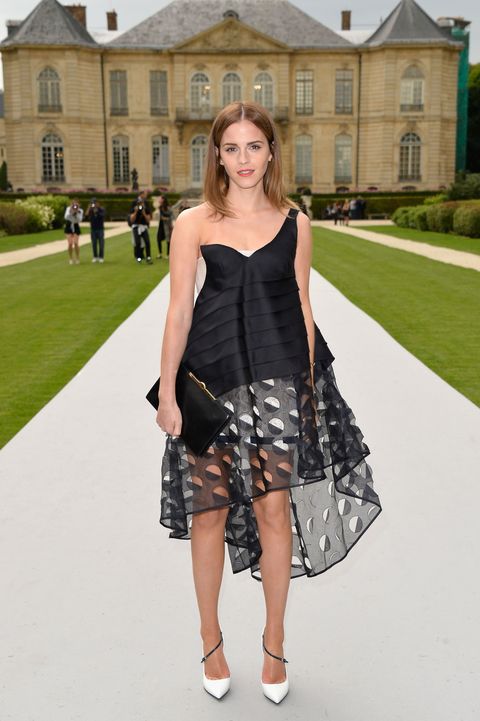 Emma Watson announced the launch of HeForShe Arts Week, "a celebration of gender equality in the arts," as part of her HeForShe UN initiative at a press conference in New York. In her speech (via The Huffington Post), Emma discussed one particular incident she felt illustrates how she's been treated differently to her male co-stars, and it's very gross:

"I remember on my 18th birthday I came out of my birthday party and photographers laid down on the pavement and took photographs up my skirt, which were then published on the front of the English tabloid [newspapers] the next morning," Emma said. "If they had published the photographs 24 hours earlier they would have been illegal, but because I had just turned 18 they were legal."  She discussed similar incidents of gender discrimination in the interview accompanying her new cover of Esquire UK. "I've had my [ass] slapped as I've left a room. I've felt scared walking home ... I don't talk about these experiences much, because coming from me they'll sound like a huge deal and I don't want this to be about me," she told the magazine, "but most women I know have experienced it and worse… this is unfortunately how it is. It's so much more pervasive than we acknowledge. It shouldn't be an acceptable fact of life that women should be afraid."

We all have a duty to confront these behaviors when we see them, Emma argued in both instances — suggesting that men in particular need to look beyond "feminism" as a scary buzzword and get a greater understanding of the issues at hand. "There's no point in me going, 'You all have to go away from having read this article and decide that you are a feminist," Emma told Esquire. "That's useless. The only thing that is going to make a difference is if men go away and speak to the women in their lives about what they are experiencing." And in an illustration that, well, they're trying but not there yet (or at least playing devil's advocate for their readers' sake), Esquire then point-blank asks why men should care about gender equality. Um, see above?! Emma responded perfectly though, pageant-style perfectly:

It's important to note that it's not about us convincing you that gender equality is worth engaging in only because there might be something in it for you. Or in it for your sister or your mother. The question is, what's in it for humans? Martin Luther King said injustice anywhere is a threat to justice everywhere. I really do believe that. And the benefits on top of that? Happier, healthier, more successful children? Being able to take proper paternity leave and see your baby? Being able to talk to someone if you're feeling shit? Actually getting to be yourself? Getting asked out by a woman? Better sex? A marriage that is a true partnership? More diverse and interesting perspectives in art, culture, business and politics? Getting to crowdsource all the innovation and genius in the world, not just half of it. A highly increased number of safe, confident and fulfilled people on the planet, particularly women? World peace? Seriously. World peace!

"There's a willingness now to be like, 'Fine. Call me a diva, call me a feminazi, call me difficult, call me a First World feminist, call me whatever you want," Emma says later in the piece, when discussing the issue of equal pay and sexism in Hollywood. "It's not going to stop me from trying to do the right thing and make sure that the right thing happens.'" And that's mostly why she's taking this year off from acting to focus on the HeForShe campaigns (she's very much enjoying her time off also, thxvm).

Read her Esquire UK interview in full here, because it's great.

Alex Rees Deputy Editor of News I’m the news director here at Cosmopolitan.com, and I could really use a cup of tea right now.
This content is created and maintained by a third party, and imported onto this page to help users provide their email addresses. You may be able to find more information about this and similar content at piano.io
Advertisement - Continue Reading Below
More From Celebrity
Travis Covered His Ex' Name With Tattoo for Kourt
Kendall Jenner Wore a Bedazzled Pink Cowboy Hat
Advertisement - Continue Reading Below
Kourtney & Travis Will Def "Have a Baby Together"
Britney Is Done With "Rude, Humiliating" Family
Ben & Jen Are Meeting Up "Whenever Possible"
Anna Kendrick Looked Pretty in Pink at a Premiere
John Mulaney & Olivia Munn Might Split Up: Source
The Sussexes Worried Archie Would Attract Mockery
Diana Would Be "Thrilled" for Harry and Meghan
'Friends' Actor James Michael Tyler Has Died at 59