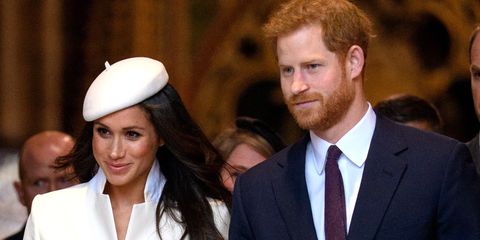 In news that probably won't surprise anyone, Meghan Markle's wedding to Prince Harry could cost as much as $45 million, and one publication has the sums to prove why.

Related Story
What Meghan Markle’s Family Have Said So Far

Page Six is reporting that, according to the website Bridebook, the "bulk of the royal costs will be spent on security," with a significant amount also being allocated to Markle's wedding gown. The extravagant day will also place Markle and Prince Harry's big day among the top ten most expensive weddings of all time.

According to Page Six, Kate Middleton and Prince William's big day cost an estimated $28 million, so Markle and Prince Harry's nuptials are set to cost a lot more.

Bridebook is predicting that around $42.1 million will be spent on security measures, which is an extremely hefty figure. As so many important members of the British royal family will be in attendance at the event, it's unsurprising that a large sum has to be allocated to making sure that everyone is protected.

Bridebook even breaks down those massive security costs:

"Besides the usual snipers on every rooftop and undercover police on the streets, the wedding will be fitted with the latest military technology, including a British counter-UAV system, which will cost at least £1 million [$1.4 million]. The system will be used to deactivate intruders and sneaky paparazzi drones. Add another £1 million [$1.4 million] to the budget for the 'Drone Destroyer.'"