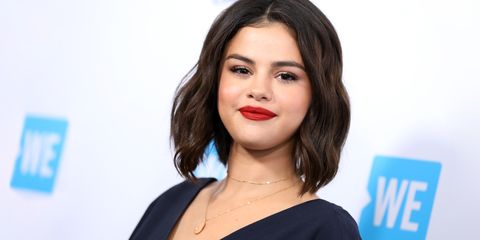 Until now, the closest Selena Gomez had come to a horror movie was that Met Gala fake tan—but her filmmaker and photographer pal Petra Collins has just posted a series of clips from their new and deeply creepy project.

The new short film, set to fill your nightmare quota for the next few sleeps, has been teased over on Instagram’s new video platform IGTV, and is set to a soundtrack of eerie whistling, quiet water splashes, and creaking chairs.

Prepare to forget all of your shiny, happy memories of Barney and Wizards of Waverly Place—well, those which weren’t already chewed up and spat out by Spring Breakers—as you see Selena hanging out in a house with disembodied fingers hanging from the ceiling.

Or: Can we interest you in Selena taking a relaxing bath with pieces of an actual face floating in the water? Selena hanging out with a half human/half turtle? Selena eating frosting from the blade of a butcher’s knife? Selena sucking on an EYEBALL? Take your pick.

Back in May of last year, Collins, who’s previously worked with Selena on surreal, edgy music videos for her tracks including “Bad Liar” and “Fetish” revealed that the pair were working on a project along these lines.

Collins told Vanity Fair: ”I love The Exorcist and the things that come from inside you, the things that are a little more subtle, and things that you deal with from inwards, and I feel like it’s something Selena and I both love talking about ... that topic is sort of dear to us.”

E! News say that the full film, titled A Love Story, is set to premiere on IGTV soon. Sleep well.

Giphy
Lucy Wood Contributor, MarieClaire.com Lucy Wood spends most of her time writing about celebby things, reading books, and waiting for the glorious day that she have enough millions for a pet sloth.
Advertisement - Continue Reading Below
More From Celebrity
Tom Hanks & Rita Wilson Are Back in Los Angeles
Meghan Is Serious About Her Quarantine Precautions
Advertisement - Continue Reading Below
Angelina's Kids Are Making Most of Quarantine
Will Says COVID-19 Is a 'Life and Death Fight'
Chrissy Tweeted a Miles/'Tiger King' Photoshop
Sussexes Make Top Hire for New Charity Venture
Inside Harry & Meghan's First Days in LA
Meghan & Harry Reconcile With the Royal Family
Why Kate & William Are Keeping a Low Profile
Tracee Ellis Ross Posted the Best '90s Throwback