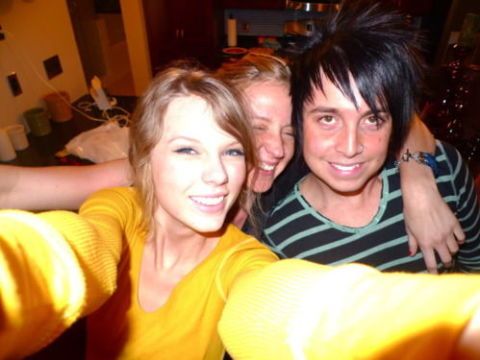 Like many teenagers in the early 2000s, Taylor Swift had a Myspace. Also like many teenagers in the early 2000s, she probably regrets most of what she posted to her Myspace, especially on her blog. So in celebration of the awkwardness of adolescents learning how to communicate on the internet and how far Taylor has come, here are just a few of her very best Myspace blog posts, courtesy of the Tumblr, Tswiftmyspace.

For more, you can check out the rest right here.

It's Christmas Eve ... Almost. And so far today, my mom and I spent the whole day preparing stuffing and turkey and everythinggg ... then ... Our oven broke. I'm not exactly sure what we're going to do about this whole ordeal, because apparently on Christmas it is absolutely necessary to have a turkey. But pretty sure our oven just broke. Ha.

So ... This is not smart. This. Being awake at 2:47 a.m. You know why? Because my wake-up call is at 5:00 a.m. I'm playing on the Today show tomorrow/in a few hours, and I'm very excited about it. So excited, in fact, that I haven't really gotten around to sleeping. I've found my attention being drawn to so many different things that I can't possibly sleep. For example: My hotel room has motion censor lighting. So when I stand up or anything moves on the floor, these little lights come on at your feet to show you where you're going. No light switches needed. In my delirious state, I've been making jokes with myself. Every time something triggers the censor lighting, I say "Witchcraft!" or "EVIL!". Then I laugh hysterically. Then I sit there for a few seconds absorbing how lame I sound/look/am at this very moment in time. At 2:47 a.m. Talking to the motion censor lighting.

This has been SUCH an exciting time for me, my album comes out in 6 DAYS. October 24th. I can't even express to you how much it means to me that you all hear it ... Also, a little bit of insight just for you guys because I love you so much and you've been so awesome for so long ... In the album booklet where the lyrics are, I encoded secret messages into the lyrics of each song. It sounds really complicated, but it's not ... all the letters of the songs are lowercase, except for random capitalized letters ... Put them all together, and you might find out some hidden messages about the song. Get it now?

Heyy, It's almost December, which means many things ... It's going to get cold, everyone has Christmas decorations in full gear, and ... It's almost my BIRTHDAY. ha. My birthday is December 13. Yay. I'm just excited to be a year older! ... My family is great. We are loud, and there are a lot of us. For me, the coolest part of the holiday was the fact that I found a Law and Order: SVU marathon and watched like 19 episodes in a row till I was about to go blind and had sleep-deprivation. AWESOME. But seriously, I never get to watch TV anymore, so it was nice to find THE show that I love.

So, on the bus — Megan, Emily, and I are still obsessed with Grey's Anatomy DVDs. We watch two episodes every night. It's a ritual. But the thing is, we were late bloomers when it comes to Grey's Anatomy ... So we're still on season two. So we're at the point where the bomb was in the hospital and all of that. Do not — I repeat, DO NOT tell us anything about what's about to happen in episodes to come. That's completely against the rules. haha.

I'm heading home tomorrow to have a dress fitting for my ACM dress. It's a custom-made Sandi Spika dress, and I can't EVEN wait to try it on ... I've already had one fitting for it. Can't wait for you to see it. And here's a little secret for only my Myspace peopleee ... I might just wear my hair up this time. I know I never do anything with my hair, but I think it's time to. How about that?

SO, I've been watching my back out here for the past couple of days. One of us is going to get pranked by Brad ("us" being Jack Ingram, Kellie Pickler, and myself). Here's why: We struck first. We'd been planning it for a while, ever since I found these hilarious Tick costumes on the internet and ordered them. Then we made Jack this exterminator costume and got him a bug sprayer. Then, two nights ago, in the middle of his show — when Brad was playing his new song "Ticks," Kellie and I ran out onstage in those ridiculous tick costumes (we looked like Sumo wrestlers). We started dancing around Brad, and running up and down the catwalks. Then Jack came out in his "Pest Control" costume and pretended to chase us around the stage, trying to spray us with fake insecticide. Then he eventually sprayed both of us, and Kellie and I pretended to die onstage. I was laughing so hard I could barely breathe. Then I was laying there on the stage playing dead and looked up at Brad, and he looked down at me and said "Nice work." Yeah. I might as well have a target drawn on me.

I'm in Calgary, Canada, and it's really nice outside. I saw a black squirrel outside my bus, climbing up a tree. It was a BLACK squirrel. I mean, who knew that squirrels were ever anything but gray? I walked around telling everybody about it, and nobody believed me. It was great. Then I was talking to one of the crew guys up here and told him about it.. His response was "Oh yeah ... we spray painted it." Hahaha. I was laughing about that for a while.