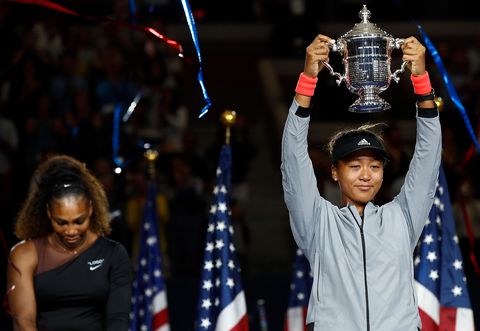 Following an explosive final game in the U.S. Open, Serena Williams has received the full support of the Women’s Tennis Association and the United States Tennis Association. This follows her claims that the umpire made questionable and sexist decisions during the match which eventually lead to her shock defeat.

Williams, who is no stranger to sexism in the tennis world, eventually lost the winning title to newcomer Naomi Osaka on Saturday. The game was unfortunately overshadowed when chair umpire Carlos Ramos delivered the star a game penalty, leading to an understandably furious Serena calling him a “thief" and demanding he apologize for his decision, which worked against her.

Following her loss, the tennis star spoke with dignity about the incident, but insisted that the harsh penalty came with ulterior motives. In a press conference, Serena said: ”I’m here fighting for women's rights and women's equality. And for me to say 'thief' and for him to take a game, made me feel like it was a sexist remark. He's never taken a game from a man because he said thief. For me, it blew my mind.”

As if the disappointment of a losing the Open wasn’t enough in itself, Serena has also been hit with a total fine of $17,000 over her conduct, which included three code violations from her game against the Japanese player—coaching from the stands, throwing her racket in anger, and calling Ramos a “liar” and a “thief”.

❤️ @serenawilliams. The true definition of a hero. pic.twitter.com/9dvvvT8mkq

As well as overwhelming support online from fans and celebrities alike, chief executive of the WTA, Steve Simon, has also confirmed that the association stands in support of Serena. While describing Osaka as a “deserving new champion," he stated: "The WTA believes there should be no difference in the standards of tolerance provided to the emotions expressed by men versus women and is committed to working with the sport to ensure that all players are treated the same. We do not believe that this was done last night."

Following the match, the United States Tennis Association, which runs the U.S. Open, also released a statement from its president, Katrina Adams, praising Williams for her “class” and “sportsmanship”.

Oh, and you can also count various male tennis stars in Serena’s supporters, too. Among those who disagree with the umpire's decision are James Blake, Andy Roddick and Novak Djokovic, who have all since spoken out to say that Williams’ behavior would probably not have been held to the same standards if she were a man.

While arguing that men and women do face the same consequences, Djokovic said after his own win in the tournament: “I have my personal opinion that maybe the chair umpire should not have pushed Serena to the limit, especially in a grand slam final. He did change the course of the match."

I will admit I have said worse and not gotten penalized. And I’ve also been given a “soft warning” by the ump where they tell you knock it off or I will have to give you a violation. He should have at least given her that courtesy. Sad to mar a well played final that way. https://t.co/xhBzFZX8Wq

Meanwhile, Serena herself made sure that Osaka still enjoyed her well-deserved victory during the somewhat awkward post-match trophy ceremony. Although entirely refusing to shake Ramos’ hand, Williams graciously told crowds: "[Osaka] played well, this is her first Grand Slam. I know you guys were here rooting. Let’s make this the best moment we can.”

TIMOTHY A. CLARYGetty Images
Related Story
See All the Celebs Spotted at Wimbledon 2018
Lucy Wood Contributor Lucy Wood spends most of her time writing about celebby things, reading books, and waiting for the glorious day that she have enough millions for a pet sloth.
This content is created and maintained by a third party, and imported onto this page to help users provide their email addresses. You may be able to find more information about this and similar content at piano.io
Advertisement - Continue Reading Below
More From Celebrity
Beyoncé Stuns in a Mesh Dress With Matching Gloves
Lizzo and Chris Evans Had the Best IG Interaction
Advertisement - Continue Reading Below
Travis Shared PDA-Heavy Bday Tribute to Kourtney
How the Queen Ends Awkwardly-Long Handshakes
The Queen Has a Rule Against Bad Talking Family
The Queen Took a Pic of Philip With Her to Funeral
The Queen's Tolerance Was the Key to Her Marriage
J.Lo "Likes" Shady IG Post After A-Rod Split 👀
Beyoncé Shares Photos of Her White Power Suit
Will & Kate Welcomed Harry Back Into Their Group